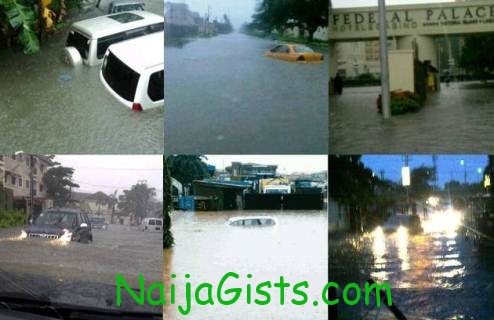 According to a report released from The Nigerian Meteorological Agency (NIMET) today, Lagos State Nigeria will soon experience a heavy 7 days rainfall.

NIMET reveals this during an interview with NAN today.

According to Mr Abayomi Oyegoke of NIMET Central Forecast Unit, a total of 570 mm of rainfall had been recorded in Lagos State between January and June.

He explained that the rains being experienced in the state were the beginning of a seven-day rainfall.

“In the last one week, it appears we are experiencing a prelude to the normal seven days rainfall and immediately after the seven days rain, what should be the next, is the little dry season.“The dry season indicates the onset of the ‘August break’ and it seems the break may come early this year towards the second or third week in July, this is also normal,” Oyegoke said.

He said the August break signified the first break of the peak of the rainfall over the swamp forest area.

Oyegoke said that the announcement by the Lagos State Ministry of Environment that rain would fall for 238 days was misleading.