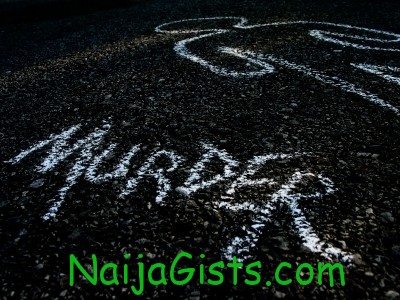 April 28, 2012 – Shocking Confession: I Killed My Girlfriend Over Abortion Money

A 27-year old man who works as a Security guard recently made a shocking confession over the brutal killing of his girlfriend over abortion procedure money. naijagists.com

Jim Zaccheus who killed his girlfriend, Miss Peace Mathias and buried her dead body in a shallow grave in his room at Elechi Beach Waterfront, Mile One, Diobu in Port Harcourt, southsouth Nigeria, said he killed her over abortion money and blamed the devil for his action.

How The Trouble Started

Some Sources said the suspect had told his interrogators that trouble started when he could not provide an undisclosed amount of money to procure an abortion of her deceased girlfriend’s three-month old pregnancy.

According to police sources, Zaccheus allegedly confessed that when he court provide the needed funds for the abortion, his deceased lover decided to procure a loan which he would pay later.

However, the suspect reneged on his promise after the abortion was procured successfully by the late girlfriend. But the late lover visited his house at Elechi Beach demand the refund of at least a part of the total money spent on abortion.

He allegedly said in his statement to the police that all attempts to persuade his deceased girlfriend to see reason that he was yet to receive his first salary from the security company where he worked fell on deaf ears.

He said “a quarrel ensued and it resulted in a brawl which made me push her and she hit her head on the wall of my room and slumped.

“When I discovered that she had stopped breathing, I escaped and out of fear, I slept in my friend’s place.

“When I came back the next morning, I found out that she was still lifeless. I became confused and decided to dig a shallow grave and bury her and later went back to my friend’s house.”

This man named Zaccheus na real son of the devil.

How can you kill someone you impregnated.

To make the matter worst, he blamed the devil for his action.