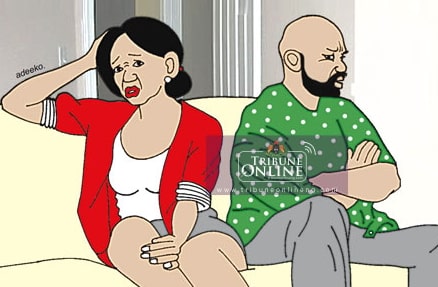 A 52-year-old trader, Kuditat Ajayi, told an Igando Customary Court that she slept with her brother-in-law because she thought he was her husband.

Ajayi’s husband, Akande, is seeking the dissolution of their 35-year-old marriage, accusing her of infidelity.

”I was in bed in the night when my husband’s younger brother came to the house my husband rented for me.

“I thought it was my husband who normally come to the house at that particular time between 9 p.m. and 10 p.m. to play and sleep with me.

“It was after he finished making love to me that I realised that he was not my husband.

“When I queried him, he claimed that my husband had traveled that was why he came to have sex with me.

“I reported the case to my brother’s wife, who advised me not to tell my brother so that peace can reign in the family.”

The respondent said that her husband treats the children of the other wives better than hers.

The mother of four denied being fetish as claimed by husband.

Ajayi prayed the court not to grant her husband’s wish for the dissolution of their marriage that she still love him.

The petitioner, Akande, approached the court to terminate his 35-year-old marriage accusing wife of infidelity.

He said that his wife was wayward and adulterous that her man friend was claiming paternity of one of their children.

“When I married her, I rented an apartment for her because I have other wives and I don’t want them to live together.

“I started hearing from people in the area that my wife was having affair with a man, initially I ignored it until her lover came claiming ownership of one of my children.

“The man eventually came to the house but I refused to open the door for him.

“When I questioned my wife, she confessed that the man slept with her but it did not result in pregnancy.”

The 71-year-old businessman said that his wife was fetish.

“I once caught her burying something in my compound, I accosted her and tried to remove what she buried there but I could not.

“I went out before I returned, she had cemented the place.”

He begged the court to end the marriage that he was no longer interested that the love he once had for her had faded.

The president of the court, Mr Adeniyi Koledoye, urged the two parties to maintain peace and adjourned the case until August 22 for judgment.

How To Make Your Marriage Work (15 Tips For A Successful Marriage)
8 Best Reasons To Be Single!