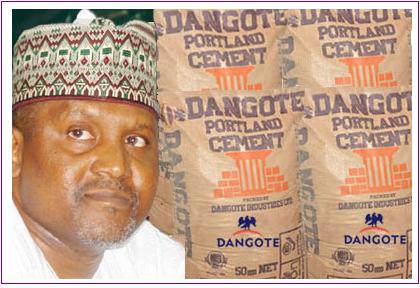 The South African government yesterday emerged the second largest equity investor in Dangote Cement Plc, with the purchase of 1.5 per cent equity stake worth N45.75billion in Nigeria’s most capitalised quoted company.

The deal was consummated at the Nigerian Stock Exchange (NSE) by South Africa, through its wholly owned investment company, Public Investment Corporation of South Africa (PIC).

A total of 255.61 million ordinary shares of 50 kobo each of Dangote Cement were bought at N179 per share.

The transaction makes the South African government the second largest institutional shareholder, after Dangote Industries Limited (DIL). It is also the only known public entity with significant shareholding in the company.

The transaction price of N179 represents 30-day volume weighted-average-price of Dangote Cement. The stock, however, closed yesterday at N210 per share.

Established in 1911 and owned 100 per cent by the South African government, PIC has some R1.17 trillion Rands, equivalent to $115 billion, funds under management.

The NSE confirmed the details of the transaction, which set a milestone as the largest trade on the stock market.

Dangote Industries Limited sold 63.35 per cent of its equity stake in Dangote Flour Mills Plc to Tiger Brands Limited, a leading South African fast moving consumer goods company. The deal was consummated at $181.9 million, about N30.1 billion. The transaction saw the transfer of 3.17 billion ordinary shares out of Dangote Group’s 3.67 billion ordinary shares of 50 kobo each in Dangote Flour Mills Plc to the Tigers Brand.

Dangote Industries Limited was mandated by the NSE to either sell down or dilute its shareholdings to enable the company meet the crucial 20 per cent free float requirement for the main board of the Exchange.

A report on companies in violation of the 20 per cent free float obtained by the newspaper showed that Dangote Industries Limited, Dangote’s holding company, and core investor in Dangote Cement has up till October 2014 to sell down or dilute its shareholdings in the cement company.

By the expiration of the deadlines, Dangote Industries is required to have completed partial divestments or dilution of its shareholdings to free 20 per cent equity stake for public holding, unless the management of the NSE grants fresh waivers and extensions for the company. In the extreme instance, a company with deficient public float may opt to delist its shares.

The Nation’s checks had indicated that Dangote Industries may divest as much as N396 billion, according to current market valuations. Dangote Industries then had about 94.9 per cent majority equity stake in Dangote Cement, falling short of the minimum public float by about 14.9 per cent. With this, Dangote Industries would have to sell about 2.54 billion ordinary shares of 50 kobo each if it chooses the divestment option. The sale yesterday represented a fraction of the required dilution.

Public float is technically a synonym of public shareholder and it refers to the shares of a quoted company held by ordinary shareholders other than those directly or indirectly held by its parent, subsidiary or associate companies or any subsidiaries or associates of its parent company; its directors who are holding office as directors of the entity and their close family members and any single individual or institutional shareholder holding a statutorily significant stake, which is 5.0 per cent and above in Nigeria.

Thus, public shareholders and public float do not include shareholders or shares held directly or indirectly by any officer, director, controlling shareholder or other concentrated, affiliated or family holdings.

[Report by Taofik Salako, The Nation]