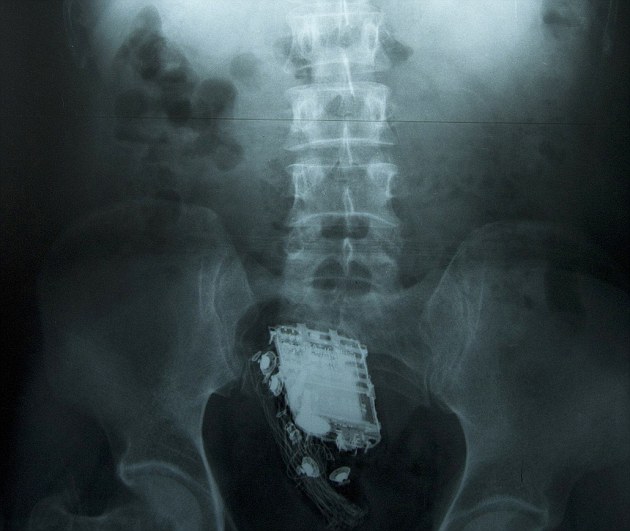 The unthinkable happened in Srik Lanka recently after a prisoner was caught hiding his cell phone in his anus.

According to the Daily Mail, a Sri Lankan prisoner who hid his mobile phone up his rectum during a search of his cell was caught out when guards heard ring tones from his rear-end.

X-rays taken in hospital, where doctors tried to remove the handset from his rectum, reveal the lenghts the prisoner went to in order to conceal it.

The 58-year-old convict at Welikada prison, Kotte, Sri Lanka, was in possession of a mobile phone – which prisoners are banned under prison rules.

Before concealing the device however, he forgot to turn it off or switch it to silent mode, and his plan was foiled when the phone started ringing from inside him.

Prison guards searching his cell realised what the man had done and he had to be admitted to the national hospital in Colombo for doctors to retrieve the handset from his rectum.

The man had concealed the phone inside his person,’ the official said, asking not to be named.

He said the man, who is is serving a ten-year sentence for theft, was in hospital for two days but was discharged and sent back to prison on Friday after the handset was taken out.

Inmates having access to mobile phones has proved a problem at the high security jail in Sri Lanka’s capital.