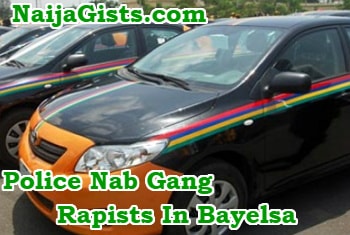 Police in Bayelsa State have arrested 2 suspected rapists operating inside a Taxi in Yenagoa.

The suspects identified as 32-year-old Amos Justin and 33-year-old Ogbara Nathan were nabbed at Tombia Roundabout in the capital of Bayelsa while attempting to flee the crime scene.

Their latest victim, a 22-year-old girl was sexually assaulted on Sunday after the suspects dragged her to a bush near Jubilee hotel.

After assaulting her, they stole her phone and zoomed off.

The victim raised an alarm and police patrol team in the area took after the suspects.