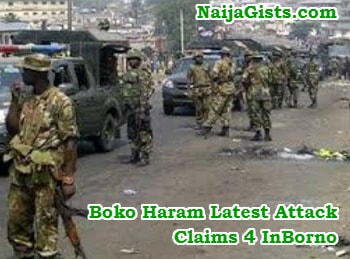 At least 18 died yesterday in a series of coordinated attacks carried out by Boko Haram terrorists in the outskirts of Maiduguri.

According to residents of Maiduguri, echoes of sporadic gunshots and multiple explosions were heard from the attack which lasted for hours.

According to security sources, the terrorists who parked their vehicles meters from security check point sneaked into Bale Shuwa and Bale Kura area of Borno state around 8pm last night and detonated the IEDs strapped to their bodies while others shot sporadically.

Several women and dozens of children were killed in the attack.

A source said dead bodies were seen in  the entire communities in the early hours of today as no security operatives could move near the communities due to darkness.

84 people injured in the attack were rushed to the hospital this morning while lifeless bodies of the attackers and their victims were evacuated.