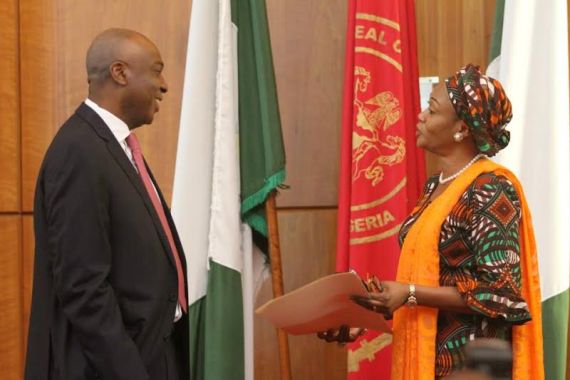 June 10, 2015 – Tinubu Wife Digraced Saraki At NASS, Turns Down Handshake During Swearing In

Today, Senator President Bukola Saraki from Kwara State, took the Oath of Office and Allegiance during a rushed ceremony at the National Assembly chambers.

The Senators arrived in the chamber early so that the Senate President could formally swear them in.

After the proceeding of Tuesday’s legislative day were adopted, each Senator took their oaths separately by reading them aloud and putting down their signatures. Protocol dictates that after each of the Senators take their Oaths they present a copy of their certificate to the Senate President, Sakari, and then shake hands with him.

Each Senator followed the protocol expect Senator Oluremi Tinubu of Lagos Central, the wife of Bola Tinubu. She refused to shake Saraki’s hand, promptly showed him her certificate, and proceeded to walk out.

As a consequence of Saraki’s rushed election the Lagos State chapter of the APC has been pursuing an evaluation of the 8th Senate Presidency Election from the National Leadership of the Party.

They hope the actions of Senate President Saraki, the Speaker of the House of Representative, Yakubu Dogara will be punished because of anti-Party actions, according to reports.

APC hopes to reestablish discipline in the Party and issue all mandatory sanctions.