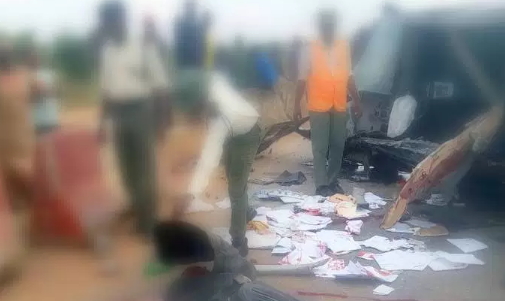 The Ogun Traffic Compliance and Enforcement Corps (TRACE) said one person died and one sustained injuries in an accident that occurred on the Lagos -Ibadan Expressway on Thursday.

TRACE spokesman, Babatunde Akinbiyi, told the News Agency of Nigeria (NAN) that the accident was due to overspeeding.

“The occupant of the car died instantly and the corpse had been deposited in the morgue at Sagamu General Hospital, while the injured person was also receiving intensive treatment at same hospital, “he said

Akinbiyi said that TRACE personnel and FRSC were on ground to monitoring and ensure free flow of traffic in the area.
He advised motorists to concentrate when driving and desist from speeding. (NAN)

Continue Reading
You may also like...
Related Topics:driver, speeding, toyota