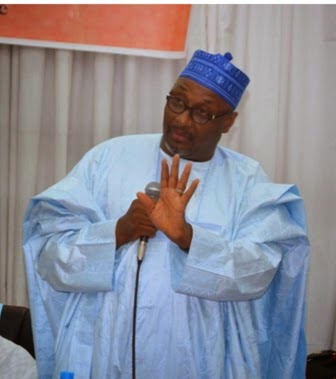 May 2nd, 2015 – “U Can’t Use Me & Dump Me”- Muazu Calls PDP Defectors Stupid, Blasts Leaders Over Resignation

Alhaji Adamu Muazu, the national chairman of the Peoples Democratic Party, on Saturday told the members of the party that he would not resign despite the woeful performance at the 2015 general elections.

The PDP National Chairman said this in reaction to calls for his resignation over the outcome of the 2015 elections in which the party lost the presidential as well as its majority control of National Assembly and state gubernatorial seats to the opposition All Progressive Congress for the first time in 16 years.

In a statement on Saturday, Mu’azu faulted the call for his resignation and those of the National Working Committee arguing that the party should stop its penchant to use and dump its officials.

“The developing culture of using and dumping has reached fratricidal proportions in the PDP and it must end. You cannot be changing Chairmen and NWC every year and still have cohesion which is a vital ingredient of winning. A good example occurred when we changed five Senate Presidents in eight years and produced calamity in the process, but for eight years we have had one senate president and produced harmony between the presidency and parliament.

“It is also time to end the spate of in-fighting and blame games currently dominating the political discourse among our membership and the leadership. It will do no one any good. The present leadership has until next year to run their course. The party will then decide how to deal with the zoning of the next leadership and strategies for winning the 2019 elections.”

Mu’azu said how to reinvent itself should be the preoccupation of the party now instead of indulging in blame game. “The elixir the Peoples Democratic Party needs to reinvent itself and retake power in 2019 instead of wasting time and energy mudslinging and blame gaming over the party’s failed bid to win a fourth consecutive presidential election victory.”

According to him, stories spreading like wild fire in the social media about schisms in the PDP can only energise the incoming administration of the APC and its desire to kill the PDP.

“But we can shock them with our usual resilience and ability to turn the tables particularly as they are already developing a tottering ineptitude in their transition progression to power.

“Our game plan is to provide a virile opposition to the new government which we have already graciously given a lifeline by conceding defeat and avoiding a calamitous battle in the courts.

“The international community have noted this great act of statesmanship on our part and we shall continue in this mode to show our commitment towards entrenching democracy in our country.

“It is therefore time for our great party to reinvent ourselves, show great maturity and map out a strategy that will return us to power in 2019.

“Despite losing our dominance in the National Assembly, our party has the largest number of experienced legislators in both chambers and will surely be calling the shots there. We will however help to reduce the imminent issue of learning process occasioned by the horde of inexperienced APC members in both houses because of national interest.

“Great lessons to be learned from the outcome of the 2015 Elections are many and I have already mentioned this in earlier interactions with the media.

“Lessons of candidate imposition, deepening of internal democracy in our party and other obvious lessons we need to learn for future guidance. It is so important for us to learn from what has happened. We must note that when the going gets tough, only the tough like the PDP can get going”, said Muazu.

He added that defection to the APC by members of the PDP was the most stupid thing going on within our party at the moment.

“Personally it does not worry me but I shudder at the wedge placed by the new ruling party banning the incoming troupes. It shows signs of how they will run the country from May 29 2015. It shows how they will not regard non APC Nigerians as part of their responsibility which will be a shame.”

Continue Reading
You may also like...
Related Topics:muazu, pdp