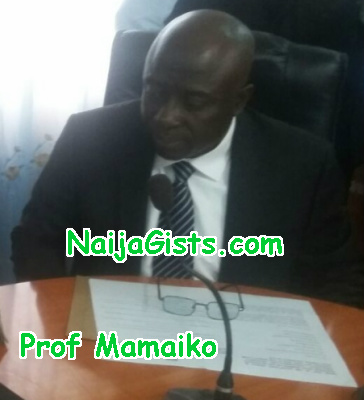 Some suspected hired assassins yesterday attacked the private residence of Prof. Sebastine Maimako, the Vice Chancellor, University of Jos, killing his guard and injuring a policeman stationed there.

Mr Terna Tyopev, the spokesman, Plateau Police Command, disclosed in Jos that the assailants took the official rifle of the policeman, after shooting him.

“There are no arrests as yet, but we have commenced investigation into the attack,” Tyopev said.
The University’s Deputy Registrar (Information), Alhaji Abdullahi Abdullahi, revealed that the gunmen stormed the residence, located along Eto-Baba Road in Ungwan-Rukuba, and opened fire at the entrance.

“They killed one of the university’s patrol officers, Owes Jibrin and also shot Police Corporal Adamu Salihu attached to the residence of the Vice Chancellor.

“Other security men who escaped unhurt, raised an alarm and the attackers fled,” he said.
Abdullahi said that no member of the Vice Chancellor’s family was injured in the incident that happened when he (VC) was not in Jos.

He said that a delegation from the university, led by the Deputy Vice Chancellor (Administration), Prof Teresa Nmadu, had already visited the family of Jibrin, the slain guard.