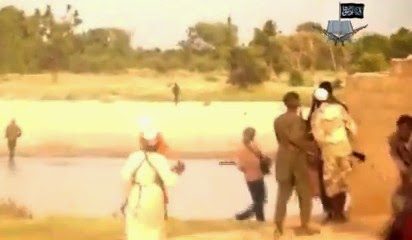 The video you are about to watch will show you what Nigerian soldiers are going through in the hands of Boko Haram militants in the north.

This brave soldier was part of a battalion fleeing for the dear lives after they ran out of bullets in front of the heavily armed Boko Haram militants.

One of them was killed but the last one engaged a Boko Haram militant in a physical struggle before he eventually escaped with gunshot wounds.

Watch the short video clip below

What happened to the billion of dollars President Jonathan borrowed to fully equip the military.

How come these terrorists never run out of weapons??? It is so sad.

RIP to the fallen heroes.