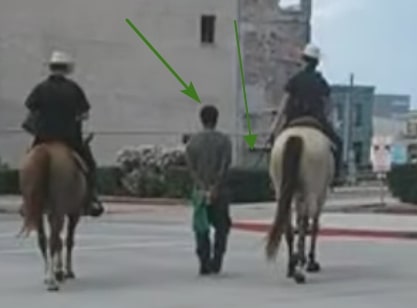 Few days after the racism inspired shooting in El-Paso, two white policemen in Galveston, Texas, have triggered outrage after a shocking picture surfaced of a handcuffed black man being led through the streets by officers on horseback.

Donald Neely, 43, had been arrested for criminal trespassing close to a private property in Galveston, after having been warned several times not to trespass at this location. 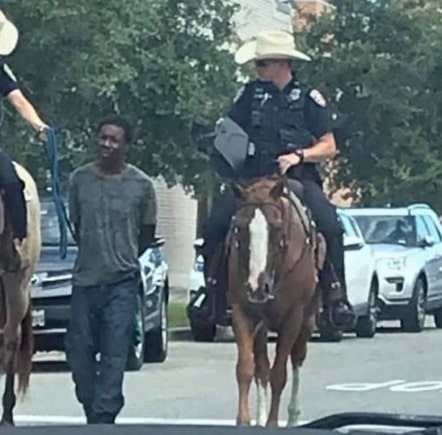 However, instead of waiting for a transportation vehicle, two white officers – named as Officer P. Brosch and Officer A. Smith – tied a rope to Mr. Neely’s handcuffs and forced him walk behind their horses for approximately eight blocks to where the mounted patrol unit was situated.

The original video of the shocking incident was posted by Erin Toberman and has gone viral, evoking anger across the racial divide.

What some of the Commenters said on Twitter said:

New York Times: “The image has gone viral and sparked outrage toward the Galveston Police Department, especially among African-American people. Its symbolism, critics said, harked back to the era of slavery and segregation.”.

This is just sickening and uncalled for.

This young black man was put on a leash while handcuffed between two mounted horses in Galveston, Texas.

Here are some comments from concerned African Americans.

@Not80689209
That is exactly why they did it. We see white men specifically going to kill brown people &cops specifically going out of their way to kill black people. See a trend? A minority has a broken light & get beaten near death but white mass killers don’t even get a scratch.

Red Robin #CorbynOutrider
@BlogRedRobin
This made me sick to my stomach.

@vamroses
This is sickening, Why isn’t every other person isn’t getting out of their cars and protesting. These police are making a statement, that black citizens are less than human. I know I am not a US citizen but the whole world should condemn this. I am so angry.

Philander Wicks
@philanderwicks
This is dehumanizing and traumatizing. A picture is worth a thousand words. It has a chilling effect and conjures up images from the past of slave catchers bringing back a runaway slave. Utterly Disgusting.