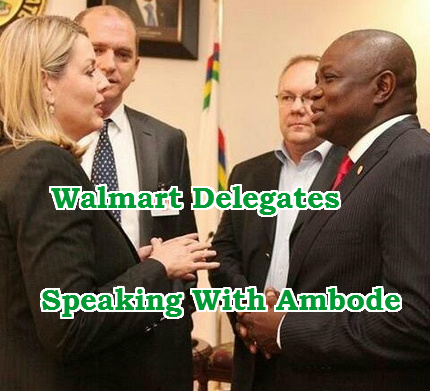 Some delegates sent by Walmart met with Lagos state Governor Ambode yesterday where they presented their plans of boosting Lagos economy with him.

The delegation led by Shelley Broader, the President and CEO of Walmart Europe, Middle east, Africa & Canada said the presence of Walmart brand in Lagos would not only boost the economy, it will create over 2000 jobs for jobseekers.

Ambode welcomed the brand with open arms. He said the success story of the brand, which operates in 28 countries with over 2.2 million employees, will be beneficial to the state’s growth.

“That summaries the reason why Walmart has to berth in Lagos. We are committed to expanding the business scope for Walmart and like I said I am interested in having your brand signature in Lagos.

“As we speak, we have a population of over 21 million people and four million are middle class.

“We have youths craving for jobs and whatever it is that we do, we want to make sure that we attract as much investment in Lagos that can help us take our youths off the streets,” he said.

Ms. Broader acknowledged the investment opportunities in the state, adding that the group is ready to expand its horizon and create jobs.

“We are incredibly excited and proud to be in Lagos. Just looking at the burgeoning economy and at the growth in this market is very exciting and now Walmart operates in 28 countries and our mission is to lower the cost of living to help people save and live better.”

3 thoughts on “Walmart Opening Stores In Lagos Nigeria Soon, US Retailer Vows To Create Over 2000 Jobs”