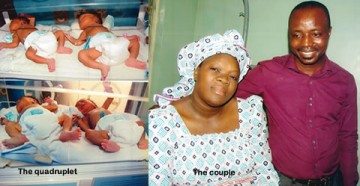 The saying that “a patient dog eats the fattest bone,” could be used to describe the experience of a couple, Mr. and Mrs. Samuel Olayiwola, who on Thursday had a set of quadruplets at the Lagos University Teaching Hospital, Idi- Araba, after 17 years of marriage without a child.

Narrating her experience, Victoria, a business woman, said on the advice of her husband, she stopped trading about three years ago so that she could devote more time for proper medical consultation.

“Words cannot describe how I felt when I found out we would have quadruplets. I am elated, the delivery was short and my babies are fine. I am thankful to God,” Victoria said.

She said she got married on March 4, 1995, and after 15 years of visiting several private hospitals in her quest to have a baby, the couple planned to seek help in a United Kingdom hospital.

But Victoria said before they could perfect their plan, they were referred to specialists in LUTH in 2010.

“We had already secured Visas to go for medical examinations abroad because we had been to several hospitals in the country but when we came to LUTH, they reassured us that they could equally provide the medical services we were going to get abroad,” she said.

She called on the Federal Government to equip its hospitals and also provide adequate infrastructure, adding that poor medical facilities would discourage people from patronising government hospitals.

She said, “We have the experts and specialists. In fact, our doctors are the best abroad. But we are worried about electricity because we know that most of the medical equipment will require electricity to work.

“I urge the government to encourage Nigerians to patronise our hospitals by equipping them with infrastructure that our medical personnel will need.”

The babies who are presently at the neo-natal ward of the hospital were delivered through elective Caesarean Section, which lasted between 10.42 pm and 10.49 pm on Thursday.

The babies are the first set of quadruplets to be born at the hospital this year.

The 42-year-old mother of three girls and a boy told Metro at the Ward-C 2 of the hospital on Monday that the babies were enjoying adequate medical care at the hospital.

The head, Public Relations Department of the hospital, Mrs. Hope Nwakolo, said the babies weighed 2.2 kg, 1.85 kg, 1.75 kg and 2kg respectively at birth and were born prematurely at a gestational period of 35 weeks.

Nwakolo said the babies had good chances of surviving due to their healthy weights at birth in addition to the well-equipped paediatric ward and experts who had been attending to them and their mother.

Meanwhile, the elated father of the babies, Mr. Segun Olayiwola, who is the General Overseer of the Living God Preparatory Assembly, Abule-Egba, Lagos, said he was financially capable of providing for the babies but would welcome support from interested Nigerians, governments and organisations.

Olayiwola said, “I waited for this long because I had trust in God. The ultrasound initially revealed three babies which we had always wanted but two weeks later, one of the eggs broke and we were told to prepare for four babies. I was compensated with four babies at a time after 17 years.”

The 48- year-old father advised childless couples to be firm in their faith, seek medical assistance early and also protect their spouses from victimisation from families and friends.(culled fr the punch)

Continue Reading
You may also like...
Related Topics:couple, nigerian, Quadruplets