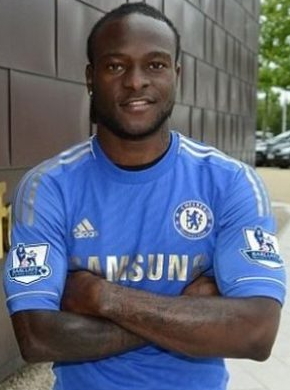 The January transfer window opens in 32 days with big money expected to be splashed on players who have excelled since the new European season began in August. I’m excited that a Nigerian is the beautiful bride of European teams. Many club managers are thinking of offering Victor Moses long term contracts in the summer. Moses has earned three Man-of-the-Match diadems, playing for Chelsea at the right wing-back position, a place designed for the Nigerian by his Italian manager Antonio Conte.

What it simply means, if Moses doesn’t understand, is that the position is his for as long as Conte remains Chelsea’s manager. I also know that Moses understands that Chelsea’s owner is notorious for sacking managers who don’t meet his expectation. It follows, therefore, that Moses should not be cajoled into extending his contract based on his form. Rather he should follow his mind and head for Barcelona next year.

Chelsea would recruit massively in the summer, if it returns to the UEFA Champions Leagues. This means that Moses’ shirt isn’t guaranteed, even if Conte remains on board. I also don’t think that Moses will enjoy regular appearances with Chelsea now that Ivanovic is being introduced as his substitute. The right wing-back position isn’t Moses’ rightful position. My hunch tells me that Ivanovic may soon bench Moses, given the fact that it is his position. Besides, he is bigger and stronger, but not as skilful as the Nigerian.

I would advise Moses to head straight to Barcelona next year. In Barca, Moses will be able to express himself properly since much of the Spanish side is an embodiment of very skilful players with incredible team understanding. Besides, Barcelona’s manager Enrique will be playing Moses regularly since he is the one recruiting the Nigerian. In Chelsea Conte could be fired mid-season next year, if things go awry.

Moses should use the remaining part of this season to master playing at the right wingback position. A vacancy exists already in that position at Barcelona, which he could easily grab, no matter who is recruited in January to man it till the end of the season. Besides, Barca is a more stable club for skilful players, such as Moses, not Chelsea without a traditional style. Barca’s tikitaka (passing game) is legendary.

The English press has been unfair in analysing Moses’ form. Many Chelsea fans are wondering why the Nigerian’s talent couldn’t be recognised by Jose Mourinho. They have argued that Mourinho couldn’t bring out the best in Moses to command a regular shirt largely because the Portuguese likes playing big, strong and tall players with grit than smallish men with sublime skills such as Moses and Mata, even now that the Spaniard plays for Manchester United.

A few pundits in Moruinho’s defence argued that Moses was in Liverpool, Stoke and indeed West Ham and didn’t play as well as he is doing at Chelsea under Conte. But the truth remains that Moses cannot force himself onto the pitch if the coaches feel otherwise. Conte has shown that Moses is a versatile player. He needs to play for a formidable team that relies on playing as a unit than on one player’s yeoman effort.

It is for this reason that Moses should consider the Barcelona option, given the array of stars in the Spanish side and their pedigree in Europe. Barca is a constant fixture in big European competitions, winning trophies with aplomb.

Wednesday’s award as the best player in the Barclays English Premier League matches for November further enhances the need for Moses to accept the Barcelona option, which offers him better challenges.

Indeed, it has been quite a while since a Nigerian was voted the African Footballer of the Year. I feel strongly that Moses would thrill the world from September 2017, if he signs for Barcelona in the summer. Barca is always in the news. They may be tottering now, largely because Lionel Messi is injured. But the bigger picture is that Moses’ inclusion in the team would reduce the burden on the Argentine. Moses’ inclusion would give Barca the balance on the right flank that they lost when Dani Alves dumped them this season for Juventus.

I tip Moses to be the African Footballer of the Year 2017, if he makes the move to Spain. This doesn’t mean if he remains at Chelsea he wouldn’t be crowned. The truth is that as a new recruit, Moses would be played since there is a vacuum in that position, which means he would command a regular team shirt. I don’t think it would be the same for Moses with the Blues.