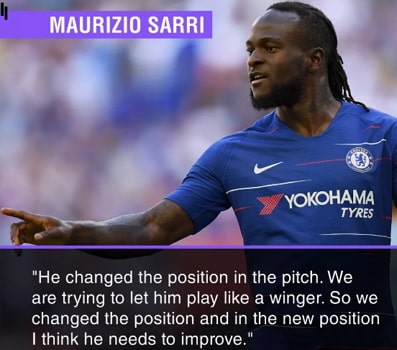 Victor Moses’ grass to grace story isn’t only interesting but puzzling. He lost his parents in the Kaduna crises, sneaked into London, where he declared himself a refugee and later landed on the football pitch playing for an English club as a rookie. Moses’ silky skills awed those who picked him for the clubs, culminating in his playing for some of England’s youth teams.

Born in Lagos, Nigeria on December 12, 1990, Moses is the son of a Kaduna pastor. His mother was a housewife who, in her spare time, would assist with her husband’s work. The future star was just 11 years old, when his parents were killed during a religious riot in Kaduna in 2002. Moses was not at home as he had gone to play football with friends. The family’s home was burnt with his parents in it.

In fact, all major decisions in Moses’ life were his, with most of them beneficial to his future. He dumped England, which gave him a place to rest his frail nerves and a shoulder to rest his head from the trauma of losing his parents to play for his fatherland. A rare show of patriotism, which hit the headlines. Not many expected Moses to pick Nigeria ahead of England, but like they say, blood is thicker than water. He remains a Nigerian and it is good to say that Moses was the pivot to the country’s emergence as the first nation to qualify for the Russia 2018 World Cup in the African zone.

Having won the gold medal and the ultimate prize with the Super Eagles at the 2013 Africa Cup of Nations in South Africa, Moses argued that participating in two consecutive World Cup tournaments in Brazil in 2014 and in Russia in 2018, he had done his best and would want to leave the stage for the younger ones. Good thinking, no doubt, but Moses should have known that at 27, he should be the next icon, like John Mikel Obi to guide the younger ones through the difficult times en route becoming stars.

No football team parades all rookies at major tournaments, such as the Mundial. Some experienced ones in the team help to boost confidence in the younger ones. The Eagles, especially, needs a big stage player to galvanise the squad during competitions. Such stars form the fulcrum of all previews and reviews at big competitions, such as World Cup, Olympic Games, Africa Cup of Nations etc. Most countries pick their captains from the big stars’ group based on their experience and form.

Nigeria is lucky that John Mikel Obi has not quit the Eagles and we have not played against a renowned football nation; otherwise, the impact of Moses’ decision to quit would have been apparent. Ahmed Musa held the forte for the big stars against Seychelles in Victoria early in September. But it would have been better, if Moses had made the trip in Mikel’s absence due to injury, even though Mikel doesn’t like playing on artificial pitches, such as the one on which Seychelles played against Nigeria.

It is good that Moses is reconsidering playing for Nigeria again. He has seen his mistakes, now that Chelsea FC of London’s new manager Maurizio Sarri has confined him to watching the Blues from the stands. It simply means that Moses is closer to being placed on the transfer market, unless he forces himself into the first team before December. What Moses didn’t consider before quitting Nigeria’s international matches is that the nucleus of Chelsea’s players are internationals in their countries.

Moses is enjoying the European status because of his dual citizenship. But he needs a country’s platform to be tagged an international. Besides, international matches for the country bring opportunities for new clubs to come, if you are the poster player of the tournament like Austin Okocha was for Nigeria at the France ’98 World Cup. Need I remind Moses of what Nwankwo Kanu became after the Atlanta’96 Olympic Games’ feat? Moses can be another Okocha but he must exhibit the desire and com mitment Okocha put into Nigeria’s matches. Okocha, like Kanu won several matches for Nigeria, playing for big European clubs, which is what Moses hasn’t actually done.

A return to the Eagles offers Moses the best chance, beginning with the October 10 and 14 fixtures against Libya, first in Kaduna and in Tunisia, where the North Africans play their matches. Moses will write his name in gold if he leads Eagles to beat Libya on a neutral ground, which is what Tunis is to them.

Moses’ loan deals with English clubs have been legendary. He won’t want to go through that road again, especially as he isn’t growing younger. But he has a chance to redeem himself from this seeming self-destruct when chieftains of the Nigeria Football Federation (NFF) and the team’s manager, Gernot Rohr attend FIFA’s The Best awards in London on September 24.

The Nigerian delegation plans to urge Moses to change his mind on the shocking retirement from international matches. Rohr still has Moses in his plans. He wants him to be the pivot of Eagles’ quest for a fourth Africa Cup of Nations diadem. The Chelsea benchwarmer (what an appellation for a talented player) should swallow his pride and return. We all make mistakes. He will not be treated as a prodigal son, since Rohr and NFF initiated the move for a change of heart. Moses is being benched because of the change of roles by the new helmsman Sarri, unlike when Conte was in charge of the Blues.

FIFA 19 rating which was leaked by Futwiz stated that he is the team’s worst attacker based on recent researches.

Said Futwiz : ‘’Of the 33 players rated in the Blues squad, the Nigerian finished in the 21st position with an overall rating of 78. Moses was the lowest ranked offensive player in the Chelsea team, behind Eden Hazard, Willian, Morata, Pedro and Olivier Giroud, and it is not surprising that in reality, these five players have kept him out of the match day squad in the last three Premier League games.

‘’Attack-minded duo Charly Musonda and Tammy Abraham who ranked lower than Moses have been farmed out on loan to Vitesse and Aston Villa respectively, while the 17-year-old Callum Hudson-Odoi (68 overall) is technically not a first-teamer.

‘’Moses’ attributes are: 78 pace, 70 shooting, 74 passing, 73 defending, 71 physically and 81 dribbling. FIFA 19 is due to be released by Electronic Arts on September 28, 2018,’’ Futwiz wrote on Tuesday. These figures are high with an average score of 74.5. A performance by any rating. Purists are wondering what others scored to tower over Moses. After all the Nigerian earned these points playing as a wing back under Conte, not a striker.

This is the problem with the western press, with such warped analysis targeted at foreigners in their leagues. They rundown players who rejected their national teams. Moses should shame them by returning to the Eagles, win laurels for Nigeria and secure his future with better clubs on his terms – not loans initiated by Chelsea’s management. Such loans stop him from playing against Chelsea to prove his mettle.

Indeed, it has been a while a Nigerian was adjudged the African Footballer of the Year. Moses was shortlisted last year, but dropped out when the best three players were listed – Mohamed Salah, Sadio Mane and Riyad Mahrez. Salah got the diadem based on his performances for Egypt and Liverpool last season.

Mane looks like the odds-on-favourite to win the award this season, with Salah still tottering. Pundits are beginning to insinuate that the Egyptian is a one-season sensation. It appears no Nigerian will make the top three cut, now that our best Eagle, Ahmed Musa, is playing in Saudi Arabia, scoring goals with aplomb – Musa scored a hat-trick on Wednesday but such feats won’t rival goals scored in the English Premier League and the UEFA Champions league.

Only Moses has what it takes to mount the rostrum for the African Footballer of the Year diadem. The outside bet could be Alex Iwobi, but his cameo appearances for Arsenal and the team’s indictable style of play won’t count in his favour when the chips are down. Hopes of Moses playing for Chelsea went up in flames in Thursday’s Europa Cup game against PAOK in Greece, when coach Sarri left the Nigerian to sit on the bench, watching his mates beat the hosts, even with the absence of key Blues’ players, such as Eden Hazard, Mateo Kovacic and Luiz in Thessaloniki.

With such a weakened Chelsea side, many assumed that Moses will in the least be introduced in the second half as a substitute against PAOK in Greece. It never happened, fuelling speculations that the Nigerian will soon be shown the door, except he braces to the challenge. With Chelsea winning matches, it will be very difficult for Moses to force his way into the team.

Come on, Moses, return to Eagles and show the world what Chelsea is missing.