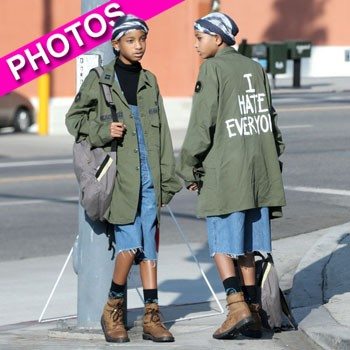 The 12-year-old daughter of actor Will Smith, Willow‘s ever increasing attitude problems is very worrisome as her troubling behaviour is sounding alarm with her troubled celebrity parents. naijagists.com

Willow Smith, who became a star with her 2010 music video “Whip My Hair,” was recently spotted looking like a home­less kid and wearing a jacket with “I Hate Everyone” scrawled on the back.

According the National Enquirer report, Willow Smith has been posting disturbing messages on social media outlets.

Now mental health experts agree her actions are a desperate cry for help.

“It’s a garment tattoo that says Willow feels like an alien in this world. She feels misunderstood, like an outcast who is not truly being seen or heard.”

Willow has regularly turned to social media websites to bare her soul, expressing her dark feel­ings on a Tumblr blog, in Twitter messages and on Instagram accounts.

Willow – who covers Adele’s version of the James Bond movie theme “Skyfall” in a new video – has also gotten a fake tongue piercing, and she shaved her head before dying her hair green. Noted New York-based psychologist Dr. Judy Kuriansky said: “I do think Willow would benefit from therapy to sort out these feelings of angst and despair that ap­pear to plague her.

Meanwhile, “Men in Black” star Will and Jada – who’ve pulled their 14-year marriage back from the brink of collapse – are arguing over how to raise their daugh­ter, sources say.

“Jada thinks Wil­low is a brilliant artist in the making,” revealed a source. “She’s been scheduling time for her in the recording studio and is shuttling her to acting auditions.

“But Will feels Willow needs more structure and less showbiz.
“They had a massive blow-up after Willow’s latest fashion statement.

Will Smith demanded that Jada back his new rules for the girl, but Jada accused him of being an old fuddy-duddy who doesn’t understand his own kids.”

Another source added: “Wil­low’s behavior is clearly a cry for help. If Will and Jada can’t resolve their differences on how to raise her, Wil­low may well nosedive even further. She’s turned into a little girl lost.” (Source: National Enquirer)