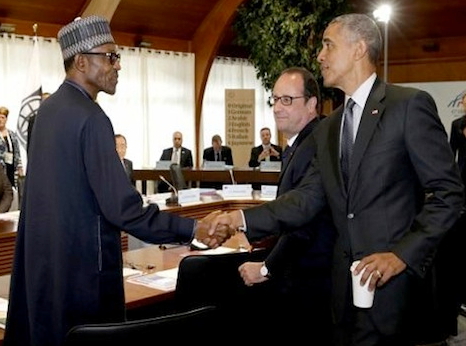 Nigeria and the United States have long been close allies since the former’s independence in 1960. Nigeria’s foreign policy even during the famed Cold War was essentially pro-West. This was expected as the country’s post-independence leaders like Dr Nnamdi Azikiwe had their university education in the US.

The US also realised from the beginning Nigeria’s potential as a country full of hope for the growth of democracy in Africa. Thus, at Nigeria’s independence on October 1, 1960, Governor Nelson Rockefeller was present as the representative of the US President. Before then in June 1960, a five-man US delegation was in Nigeria to study areas of possible economic co-operation between the two countries. This was the beginning of Nigeria-US bilateral relations.

Nigeria and the US have so much in common. Both were once British colonies. The US declared independence in 1776, while Nigeria became independent in 1960. Both fought a civil war. The US fought a civil war in 1861-1865 while Nigeria fought hers in 1967-1970. The US has 50 states while Nigeria has 36 states. The US military forces are all over the world in order to make it safe to the extent that America is often referred to as the “Policeman of the world”. Similarly, Nigerian forces are in Sudan, Liberia, Mali and other parts of Africa on peacekeeping missions to maintain peace and the country is often referred to as the Giant of Africa. The US operates the presidential system of government while Nigeria at the advent of democracy in 1999 adopted the US presidential system of government. The two countries also belong to a number of international organisations such as the UN, IMF, WTO, and World Bank. All these similarities result to better co-operation which in turn helps to deepen their bilateral relations.

These bilateral relations have therefore continued to wax stronger over the years. The Nigeria-US Binational Commission is a forum for high level discussions between the two countries. These discussions have focused mainly on areas of mutual interest particularly on good governance and transparency, energy, regional security, agriculture and investment leading to the US being the largest investor in Nigeria. In the area of security, the US is instrumental to the establishment of the Simulation Centre at the Armed Forces and Staff College. It is currently assisting Nigeria in the fight against terrorism in the North-East. Such has been the US-Nigeria bilateral relations over the years.

Although there were occasional tense moments particularly during the Murtala-Obasanjo regime over Angola and before then during Gen. Yakubu Gowon regime during the civil war following the US refusal to sell arms to the Nigerian Army which was taken by Nigeria as a tacit support for Biafra. However, the US-Nigeria bilateral relations have always remained cordial.

On state visits between the leaders of the two countries, it started as far back with the visit of Nigeria’s first and only Prime Minister, Alhaji Tafawa Balewa, to the US from July 25 to 28, 1961 on the invitation of President JF Kennedy less than a year after Nigeria’s independence. During the visit, Balewa addressed a special joint session of the US Congress. A rare privilege and honour accorded to few heads of government. Similarly, Alhaji Shehu Shagari was also on an official state visit to the US from October 3-8, 1980.

In the years after the military rule and since the return of democracy in 1999, every Nigerian President has visited the US. President Olusegun Obasanjo was on an official visit to the US from October 27 to 30, 1999 on the invitation of President Bill Clinton. Less than two years after, the same Obasanjo was again on an official visit from May 10 to 12, 2001, on the invitation of President George Bush. In all, Obasanjo visited the US at least on five different occasions.

Other presidents after Obasanjo that visited the US include Alhaji Umaru Yar’Adua, Dr Goodluck Jonathan and now, Muhammadu Buhari. These state visits to the US by Nigerian leaders clearly show that Nigeria considers the former as an ally.

Like their Nigerian counterparts, all the US presidents both Republicans and Democrats since 1978 have visited Nigeria except Ronald Reagan. The first US President to visit Nigeria was the Democratic President Jimmy Carter from March 31 to April 3, 1978. Clinton, another Democrat, was also on an official visit to Nigeria from August 26-28, 2000. While in Nigeria, he addressed the National Assembly and before he left, he was given three Nigerian names which include Sodangi, Okoro Omowale. The Republican President George Bush also visited Nigeria from July 11-12, 2003. American presidents through these visits affirm the strategic importance of Nigeria to the US.

During the run-up to Barack Obama’s election as on November 4, 2008, the generality of Nigerians were enthusiastic that an African-American was contesting the US President. Nigerians were therefore solidly in support of Obama’s presidential ambition and prayed fervently for him to win. In fact, the enthusiasm was so much that if it were to be possible, at least for the purpose of voting for Obama, Nigerians would not mind if their country became the 51st state of America. Thus, when Obama was sworn in as the first African-American President of the US on January 20, 2008, Nigerians went wild with jubilation. It marked a defining moment in the history of the US and the Black race. Nigeria, the most populous Black country in the world, stood tall.

It is therefore to be expected and in fact taken for granted that Obama would visit Nigeria before the end of his tenure. Alas, a few months to the end of his exit, Nigerians are still waiting to receive him. It is however never too late for President Barrack Obama to visit Nigeria.

Finally, given America’s chequered history of race relations, Obama’s election no doubt technically put an end to racism in the US. Although some few American individuals may still be racist, the generality of Americans however have since done away with racism. It is in the light of this that Obama should finally remove the only vestiges of racism in the US which is the name of the official residence and principal work place of the President of the US, the “White House.” Whatever the reason behind the name, it connotes racism. The “White House” was largely built by enslaved and free African -merican labourers. As of the time it was built, these enslaved and free African-American labourers could never have dreamt or imagined that one of their own would one day reside there as the President of the US. This much was alluded to when Michelle Obama, the American First Lady, addressed the National Democratic Convention held in Philadelphia from July 25-28, 16.

President Barack Hussein Obama, if it is the last thing you will do before the end of your tenure, just like your awaited visit to Nigeria, please, change the name of the “White House” to “American House.” His Excellency, Mr. Stuart Symington, the US Ambassador to Nigeria, should kindly forward these requests to President Barack Obama.