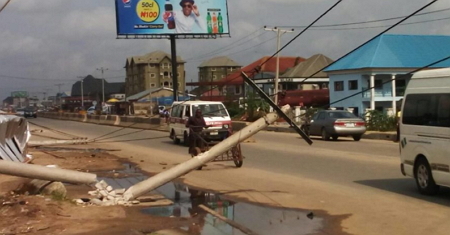 By Adeyinka Akintunde, The Nation – A strong storm yesterday afternoon swept through the commercial heartbeat of Abia State, leaving in its trail destruction of monumental proportion and throwing the city into darkness as several electric poles were brought down by the fierce wind. This is even as many house roofs were blown off.

Also high tension cables and heavy billboard stanchions were not left out as the hurricane pulled them down along major roads in the city thereby making residents to be enveloped with fear.

The hurricane which started late on Sunday with slight rain that did not last up to 15 minutes, however, left major areas of the city, especially Umungasi, Brass and Asa Road in total destruction and fear as transporters and commuters scampered for safety while those in their houses were rattled by the banging of the ramping hurricane on their doors and windows.

When our reporter went round the city on Monday to ascertain the level of damage caused by the hurricane, it was discovered that not less than eight high tension poles with cables were pulled down along Aba-Owerri Road, Ajiwe Avenue, Nwogu Street and Brass Street all within the Umungasi axis in Aba North and Osisioma Local government areas respectively.

Almost all the roofs at the popular Umungasi mini market were carried away while most of the zincs at the Okigwe road primary school being rehabilitated by the state government were also affected.

A trader at the market, Mrs. Juliana Ike said that they have God to thank as no life was lost. “I was in the market when this thing happened. It was a miracle, when the dangerous wind started; we had to leave the area before the high tension fell. You can see how the roof of the market was damaged by the wind. I thank God that there was no electric light when this happened, then if not, my two children I, who came to help me here would have been electrocuted.”

Also at Asa Road by Jubilee Junction, the hurricane pulled a heavy billboard and smashed it on a while Lexus Sport Utility Vehicle (SUV) packed nearby, although no life was lost.

According to an eyewitness, “We were here when the owner of the SUV parked it to repair his generator here. The rain came with a heavy wind which made everyone to run in for safety.”

Power was yet to be restored to the city as at the time of filing the report as many people were still busy trying to replace their blown off roofs.

Some residents speaking in an interview urged the Enugu Electrical Distribution Company (EEDC) to not only restore power to the city but also ensure speedy removal of pulled down electric poles and cables.

Speaking on the incident, Head, Communications, EEDC, Mr. Emeka Eze with residents of the city to exercise patience as EEDC was on top of the situation and would restore light to the area in a short time.