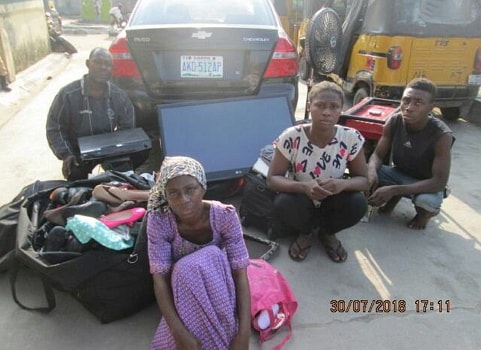 A man simply known as Uroye Teddy, his wife, Margaret, their teenage son, Tega, and his lover, Karima Edom, have been arrested for alleged burglary and theft.

The suspects were said to have broken into 8, Ade Onitiri Street, Harmony Estate in Langbasa, the home of one Mrs. Folasade Odunuga.

According to the police, the said Mrs. Odunuga was on a three-month vacation, which commenced in May 27, when the incident occurred.

It was gathered that the suspects looted the woman’s car and other household items after gaining entry to her house from the ceiling.

Edom, said to be the victim’s neighbour, allegedly informed Tega that she was away from home, laying grounds for the burglary.

Police alleged that the lovebirds also had a romantic trip at the victim’s home as they cooked, wined and dined there.

It was gathered that Tega with the aid of his parents, started looting the woman’s home and continued for weeks before Mrs. Odunuga’s domestic help, Eniola Abisola, visited the premises and discovered that many items were missing.

She alerted the Divisional Police Officer in the area, Adaobi Okafor, a Superintendent of Police (SP), who mobilised her men to search neighbourhoods for the suspected criminals.

“When the detectives checked on Tega, they saw the stolen Chevrolette Aveo saloon car with registration number AKD512AP, parked in front of his parent’s house at New Osho layout, Langbasa. He was promptly arrested.

“During interrogation, Tega revealed that he entered the victim’s house through the ceiling and packed the household items to his father’s house.

“He narrated that his mother helped him to hide the stolen items in an uncompleted building while his girlfriend Karima, hid some in her house.

“Tega further revealed that his father went with him to the victim’s house to tow the aforementioned car. It was seen that Mrs. Margaret Teddy had put the stolen properties for sale,” the spokesman for the Lagos State Police Command, Chike Oti, a Chief Superintendent of Police (CSP), said.