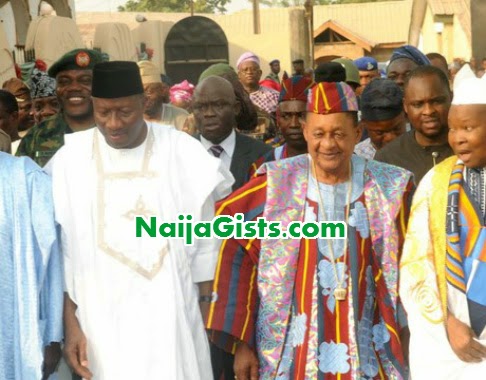 Speaking after a meeting of the committee members in Ibadan yesterday, he disclosed that the duo would resolve their differences.

Checks re­vealed that many Nigerians believed that Obasanjo, who dumped the Peoples Demo­cratic Party (PDP) earlier this week and Jonathan, who is the PDP presidential candidate for this year’s general elections had fallen apart.

Akinruntan, the Okoro Agija 1, who is the Olugbo of Ugbo Kingdom in Ondo State, noted that Obasanjo and Jona­than knew how to settle their differences, adding that the committee wanted peaceful conduct of this year’s general elections.

“We don’t dabble into poli­tics. They (Obasanjo and Jona­than) have been friends for ages. They would settle them­selves. If you see them fight­ing on pages of newspapers, it doesn’t mean they are enemies. If any of them has any event now, don’t be surprised to see them turning up,” he said.

The monarch also spoke on the efforts of the committee in resolving conflicts among Yo­ruba Obas, adding that the pro­vocative utterances that could lead to feud among the tradi­tional rulers had been checked.

Akinruntan noted that the committee had been having separate meetings with the Alaafin of Oyo, Oba Lamidi Olayiwola Adeyemi III, and the Ooni of Ife, Oba Okunade Sijuade Olubuse II, towards resolving the feud between the two Yoruba monarchs.

He said the efforts had been yielding fruitful results. The two monarchs, he stated, hardly launched verbal attacks against each other like before.