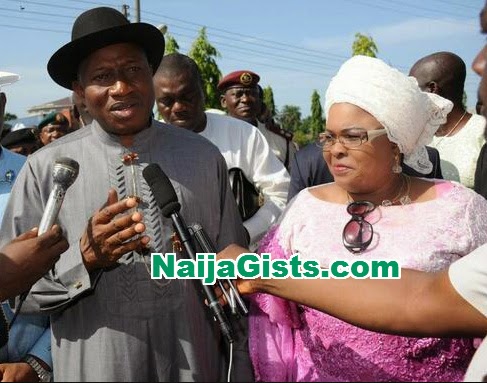 A socio-political organisation, Yoruba Ronu Leadership Foum, has called on President Goodluck Jonathan to call his wife, Dame Patience, to order over what it described as unedifying comments.

In a statement signed by the group’s Secretary General, Akin Malaolu, it said though her (Patience’s) desire to support her husband and promote the rights of women was within her constitutional rights, she should be watchful of her choice of words.

The statement read in part: “We wish to remind the first lady that every right comes with a corresponding duty. Mrs Jonathan’s choice of words has fallen short of edifying on some occasions. Calling her husband’s rival ‘senile’ and ‘brain dead’ in the name of politics is inappropriate.

“Asking Nigerians calling for change to be stoned is illegal and unbecoming. It amounts to hate speech, which is forbidden by the electoral law. That she has been tolerated so far is testament to Nigerians’ quest for peace and respect for her position, but she is carrying it too far and needs to be called to order.

“If that cannot be achieved at home, we as guardians of our culture and tradition are compelled to do so from outside. Mrs Jonathan would do well to listen, lest she continues to bring ridicule not only to her beloved husband and his candidature, but also to the people of Nigeria.”