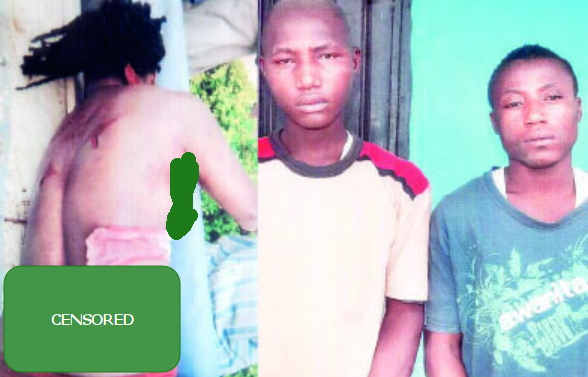 Nov 12, 2017 – Tragedy As Cultist Kills Aunt In Mpape Abuja Over Her Refusal To Pay His Rent

Peter is alleged to have stabbed his aunt, 35-year-old Salome Idoko, to death with the help of an accomplice, Istafanus Yerima, 22, in the sitting room of her residence close to Berger Bridge Quarry Gate, Mpape, Abuja.

The FCT Commissioner of Police, Mr. Abubakar Bello told Sunday Sun that the ugly incident happened around 1:35am on September 28, when Peter, a nephew of the deceased and his friend, Istifanus, went to the home of the aunt to threaten her and demand N30,000 from her to pay his rent. Peter had earlier stayed for three days with the family of the deceased. Later, the husband of Salome, James Idoko, gave Peter a ride to Maitama, and also gave him N1000 to cover his transport fare to Maraba, Nasarawa State, where he lives.

Bello said that Peter, accompanied by his friend, went back to the aunt’s house. She welcomed him and sought to know his reason for returning to the house. Then asked Peter’s friend to step out of the house, so that she could discuss with the nephew.

Suddenly a hot argument ensued, leading to a fight between Salome and Peter. Yerima was said to have gone into the house to ostensibly separate them. Instead, he stabbed her on the wrist with a knife. Peter snatched the knife from him and stabbed that woman again on the back. She fell and began to bleed profusely. The two assailants ignored her and proceeded to remove the plasma television set in the sitting room and also took N500 from her purse.

The alleged crime came to light when Salome’s four children came back from school and saw lying in a pool of her blood about 3.30pm. They screamed in horror, and attracted the attention of neighbours, who rushed the deceased to Asokoro General Hospital. Due to the huge loss of blood as she lay in her house without help, Salome died. The benevolent neighbours then contacted her husband, who promptly reported the matter at the Mpape Police Station. From there, the case was immediately transferred to the FCT SCID, Abuja. Detectives in the department promptly launched an investigation.

Their efforts were successful as peter was arrested on September 30. Upon interrogation, he made useful revelations that led to the arrest his friend, Istafanus, at his workshop.

In a brief chat with Sunday Sun, Peter said:

“I am a member of Young Vikings Confraternity. It was Yerima who initiated me into cultism. I am a welder by profession. I stayed with my aunty in her house for three days. Then the husband dropped me off at Maitama Bridge and gave me N1,000 for transport to return to Maraba. I went to my friend’s house and slept there. I told Yerima, my friend that I just wanted to threaten my aunt and collect N30,000 from her for my house rent.”

Peter who hails from Obi Local Government Area, Benue State explained further that Yerima cupped the mouth of the deceased to prevent her from screaming for help. After escaping with the plasma TV set, he hid it in his brother’s house.

“When I heard the news that my aunt had died, I went to their house to sympathize with them. As I got to Mpape, policemen accosted me, and began questioning me. When I confessed what happened, they arrested me.”

Sunday Sun learnt that the duo attended Aso Primary School, where Yerima took Peter into the Young Vikings Confraternity, a cult group. Yerima, a native of Gbagyi Local Government Area, Nasarawa State, said that he was provoked to stab the deceased, who slapped him when he tried to separate her and Peter as they were fighting in the room.

Yerima who said that he is an artisan that specialized in the molding of plaster of Paris for interior design of buildings said that they had no intention to kill her, stressing that his reaction was the result of provocation by Salome, who slapped him.

The husband of the deceased, James Idoko, told Sunday Sun how his suspicion of Peter led to the suspect’s arrest.

He said: After my wife died and people started coming on condolence visit, I noticed that Peter, my late wife’s nephew was absent. I asked his twin brother, Godwin Peter, whether Sunday Peter was not aware of the death of my wife.

He responded that he was aware of it. I started to suspect him of being behind my late wife’s death. I told the police at Mpape Police Station that I suspected Peter over the death of my late wife.

“On Sunday as Peter was coming to my house, policeman called him aside and interrogated him and he confessed.
“This is a lesson for everybody to be careful about who you trust. I want to appeal to the police to release the corpse of my wife so that we can bury her. I know that she cannot come back to life, but I look up to God to grace to bear this loss. It is avery painful one.”