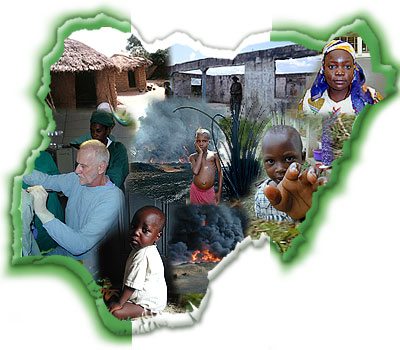 The number of Nigerians living on less than $1 per day or absolute poverty has increased since 2004 despite economic growth in the country, the National Bureau of Statistics said on Monday. With an estimated 160 million Nigerians, it means slightly over 100 million people are living under abject poverty.

Yemi Kale, the Statistician General of the Federation giving a statistical analysis of the general living standards of Nigerians at a press conference in Abuja today said the percentage of Nigerians living in absolute poverty rose to 60.9 percent in 2010, compared with 54.7 percent in 2004.

He also said about 71.5 per cent of Nigerian population were relatively poor as at the end of 2011, an increase of about 2.5 per cent above the 69 per cent rate recorded in 2010.

The figures released by the NBS also indicated that 112.52 million Nigerians out of a population figure of 150 million were living below poverty line during the period under review.

NBS put the proportions of extremely poor, moderately poor and non poor Nigerians in 2011 at 38.7 per cent, 30.3 per cent and 31 per cent respectively.

Kale said when the 2010 statistical figures poverty measurement is analysed on geo-political zones basis, it will be revealed that the North West and North East zones accounted for the highest poverty rates with 77.7 per cent and 76.3 per cent respectively.

The South West, with 59.1 per cent, recorded the lowest poverty rate in the country.

Analysis of the poverty level on state-by-state basis showed that Sokoto had the highest number of poor in the country with 86.4 per cent, compared to Niger State which had the lowest poverty rate of 43.6 per cent by end 2010.

Kale however said the 2011 figures are based on assumptions that economic conditions in 2010 was maintained in 2011.

“Accordingly, it ignores the potential positive impact various poverty alleviation strategies implemented since 2011 may have had on reversing the trend. This will become clearer once the 2011 Annual Socio-Economic Survey is completed later in the year. Thus, using the relative, absolute and dollar-per-day poverty measures, NBS estimates that poverty may have further risen slightly to 71.5 per cent, 61.9 per cent and 62.8 per cent respectively in 2011,” he added.

Nigeria has recorded an average growth rate of over six per cent in the past six years, but the growth has not translated into improvement in the standard of living of Nigerias, a situation described as ironic by the Statistician General: “Despite the fact that the Nigerian economy is growing, the proportion of Nigerians living in poverty is increasing every year’.

“It remains a paradox… that despite the fact that the Nigerian economy is growing, the proportion of Nigerians living in poverty is increasing every year,” head of the bureau Yemi Kale said in a statement.

The bureau’s latest report makes clear that income inequality, a chronic problem in Nigeria, is worsening, according to Kale.

Nigeria has been rocked by a surge in violence blamed on the Islamist group Boko Haram, whose attacks have mainly been concentrated in the north of the country.

Many analysts have said that Boko Haram is largely made up of deeply impoverished northern youths who believe they have little hope in their future or of finding a job.

Northern Nigeria is predominantly Muslim while the south is mainly Christian.

Nigeria gets more than two thirds of its revenue from oil production and crude deposits are concentrated in the south.

Few Nigerians believe they benefit from the nation’s considerable oil wealth, as petroleum revenue is funnelled to the ruling and business elite thanks to corruption and poor management. Additional reports by AFP