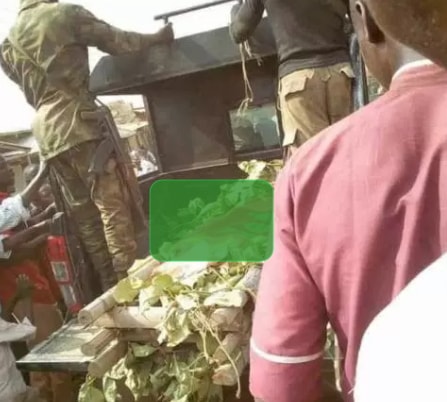 At least 11 soldiers who have been on special operation tagged ‘Operation Cat Race’ in Birnin Gwari local government area of Kaduna State were reported to have lost their lives Tuesday night when scores of bandits attacked them to avenge the killing of their leader, Buhari Tsoho, popularly called Buharin Daji who was killed in shoot out with security men in Zamfara state two weeks ago, source said.

Though, the army was yet to comment on the incident as at press time, Governor Nasir Ahmad El-Rufai of Kaduna condoled families of security personnel that lost their lives in the course of repelling the bandits.

The bloody attack, which occurred at a village called Kampanin Doka in the local government area happened at a time the federal government was trying to secure lives and property of road users who have been falling victims of armed robbery and kidnapping in that axis of Kaduna interstate road recently.

A source who pleaded anonymity said, the bandits attacked the soldier’s camp between 8pm and 9pm on Tuesday killing three soldiers in a hole and nine others in the camp making the casualties 12.

“We gathered that the soldiers had caught a thief in a village called Maganda in the area and were taking him back to their camp when some personnel of the Nigerian Police Force (NPF) asked them to hand over the thief to them which the soldiers refused.

“The same police followed the soldiers to their camp in Kampanin Doka and again asked them to hand over the thief to them, but the soldiers still refused. Around 8pm on Tuesday, bandits attacked the soldier’s camp and killed three soldiers in a hole and nine others in a tent in the camp.

“Members of the community kept calling us when the attack was taking place, but there was nothing we could do since we don’t have any weapons, all we did was to alert the emir and other security personnel with the hope that they could come to their aid.”

Another top source who witnessed the attack confirmed that, he saw 11 bodies after the attack.

This source however hinted that, men of Nigerian Army were still waiting for directive on the next line of action from Army authority as at the time of filing this report.

Meanwhile, Governor El-Rufai called for sustained collaboration between communities and security forces to overcome banditry. The governor said this in a message to the people of Birnin Gwari local government following attacks by bandits.

El-Rufai said he received with sadness reports of bandit attacks in Doka and Magandavillages. He praised the communities for their vigilance and their collaboration with the military to thwart the attacks. The governor said the state regrets the loss of lives and offered his condolence to the communities and the military over the incident.

The governor also condoled families of security personnel that lost their lives in the course of repelling the bandits, he also wished civilians that sustained injuries speedy recovery.