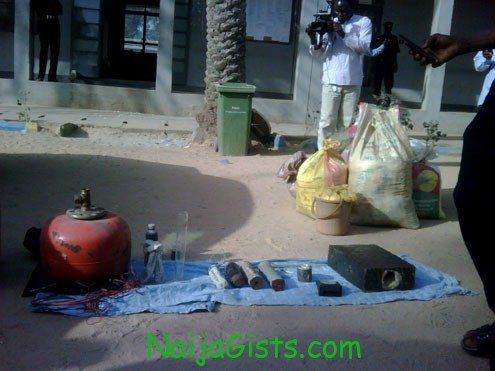 Explosives recovered by the Police from the suspected Boko Haram members this evening.

At least 6 uniform men, four suspected Boko Haram members and one civilian have lost their lives in a fresh attack by members of the dreaded Islamic sect, Boko Haram, in Kano, north-west Nigeria, just as police in the state have arrested 14 persons suspected to be members of the sect in connection with the attacks.

Many civilians and no fewer than four police men were badly injured naijagists.com.

A special squad of Police men dispatched from the Bompai headquarters also raided a compound at Unguwar Dabai, Rijiyar Zaki quarters within Kano metropolis where one Yunusa Ahmed was arrested and items including bomb detonating head explosives, wires, chemicals, audio cassettes containing the preaching of the killed Mohammed Yusuf, leader of the sect, were recovered.

The house of another suspect, identified as Alhaji Kyari who was arrested by the police, was also searched at the Gwammaja axis of Kano city where one live assembled bomb was recovered.

According to the Commissioner of Police, Ibrahim Idris, on 16 December, the house of one Mohammed Aliyu, alias Hamza, of Darmanawa quarters was put under 24 hours surveillance, “subsequently, on 17 December the suspect who noticed that his house was being monitored mobilized some members of his syndicate who drove in three vehicles and attacked the policemen on surveillance duty and shot to death, two of the police men.

“(They) also shot to death a policeman attached to Special Anti Robbery Squad who arrived timely for re-enforcement while one other police man was injured now receiving treatment in the hospital,” CP Idris told newsmen this evening, adding that the anger of members of the public was displayed, “when they attempted to mob the suspects but for timely intervention of the police.”

The police boss also hinted that, “our men on the check point at Diga junction were equally attacked by unknown gun men. During the incident, one SPY (Special Constabulary) assisting the command in stop and search was killed and one of our police corporal was shot and sustained gunshot injury. Twenty four expanded ammunition were recovered at the scene.

CP Idris recalled that on 12 December, “one of our sergeant on a check point duty at Kofar Fomfo was attacked by unknown gunmen in a Honda vehicle and sustained injuries. The sergeant responded and the gunmen abandoned the vehicle and the content and away.

Police traced the AK 47 riffle to Yobe Police Command recently attacked by Boko Haram and the Naira notes to a bank in Kaduna, an attack which Boko Haram also claimed responsibility.

s“Investigations have so far shown that all the suspects arrested or being declared wanted are non-natives or non-indigenes of this state. They are strangers who have made their states inhabitable and have fled to Kano to abuse its hospitality.

“These incidences that occurred in the last few days and the support demonstrated by the indigenes of this state have shown that they have neither sympathy nor affiliation to these groups of individuals. The Command is very appreciative of the support shown by the members of the various communities by giving us information and showing visible anger by the attacks they made on the suspects during the arrests,” CP Idris added.