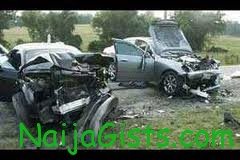 Less than 5 days to Christmas celebration, at least 18 people have lost their lives in an auto crash that occurred at Aduhanhan village, along the Benin-Agbor-Asaba dual carriage way. naijagists.com

3 others were severely injured in the accident that occurred last Saturday . Edo State sector commander of the Federal Road Safety Corps, Mr. Henry Olatunji, who confirmed the accident, said a Volkswagen commercial bus, marked XB 326 SGD, and a truck, marked YF 303 ENU, were involved in the accident.

Mr. Olatunji attributed the cause of the accident to route violation by drivers of the two vehicles who were contesting right of way.

He said those dead, including nine males and nine females, were deposited at Our Clinic hospital in Benin City.

May their soul rest in peace!