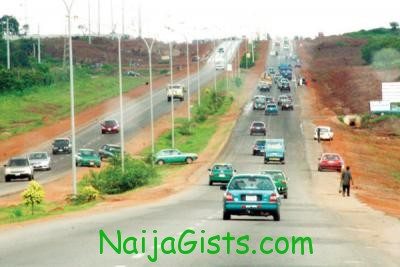 2 people have been confirmed dead, and two others critically injured in an accident involving two trucks on the Abuja-Lokoja Highway.

The accident occurred at about 7am; with the two articulated vehicles, a 7Up truck and a cement truck belonging to Dangote Cement Company, involved in a head-on collision at Ohono Village, near Koton Karfe.

The accident resulted in a three-hour traffic congestion on the highway.

Hassan Maikano, the Federal Road Safety Commission (FRSC) Head of Operations, Koton Karfe Command, who confirmed the accident and the casualty figure, said that officials of the agency used their extracting machine to pull out the dead bodies trapped in the truck, while the two injured persons were rushed to a private hospital in Koton Karfe.

A nurse on duty at the private hospital confirmed that the two injured persons were responding to treatment.