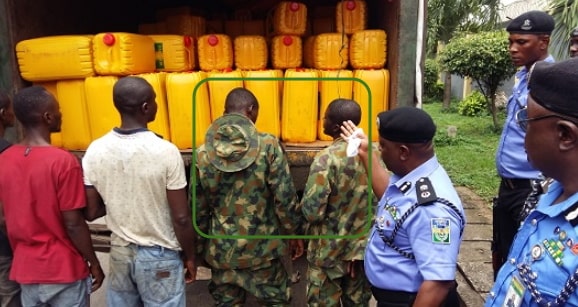 2 dismissed Lance Corporals, a fake soldier and two others have been arrested by the police in Lagos for allegedly hijacking a vegetable oil laden truck at Epe.

According to Edgal, the suspects were notorious highway armed robbers, who specialised in intercepting, diverting lorries in that axis.

He said the command had received several complaints from victims of military men hijacking vehicles carrying goods, adding that with the arrest of the suspects, it has been established that the perpetrators of the crime were criminals impersonating the military.

Edgal said the suspects were arrested on Sunday night after they hijacked a Sterling truck with registration number LSR266XW carrying vegetable oil worth N13,250,000 million.

“They stopped the Kano State bound truck close to Ijebu Ode and pushed the conductor and the driver out of the vehicle. However, as the duo were trekking towards Epe, Lagos, they came across a policeman and narrated their ordeal to him.

“The policeman immediately contacted some of the police stations along the route taken by the robbers. At about 10:30pm, policemen on stop and search duty, saw the truck coming and intercepted it. In the process, Ayele and Emeka were arrested.

“During interrogation, they mentioned the others as part of those who hijacked the truck.

“The truck and the goods were recovered intact and all the suspects have been identified by the victims. Suspects will be charged to court at the conclusion of investigation.”

However, the ex-personnel, who were dismissed for allegedly aiding Boko Haram and riotous behaviour, denied involvement in the hijack.

They claimed they were only invited by one Oloja for escort duty. While Johnson said he was promised N10,000 to escort the truck, Abiodun disclosed that his fee was N20,000.

Admitting it was wrong to have worn military camouflage years after they had been dismissed, the duo said they usually used the attire for escort duties so as to get money to feed.

Narrating how his truck was hijacked, the driver, Rabiu Kazeem said:

“I saw a hilux with amber light. It flagged me down and I saw some men with soldiers uniform. I stopped and they told me to get down. I asked them what I have done but they brought out their gun.

“My conductor jumped into the bush. Since I was alone, I could not do much. I stepped down but I didn’t go far. I sat on an iron underneath the vehicle and clung to its arm rest because I wanted to know where they were taking the truck to.

“But one of them who was on a bike saw me. I did not know he was their member. He told me to come down that he will help me pursue them, that it was dangerous for me to stay in that position.

“I listened to him but instead of pursuing the truck, he became slow and so, I raised alarm. People in the community came out and I explained what happened, begged them to hold that man while I entered another vehicle to look for them.

On our way to look for them, we saw Rapid Response Squad (RRS) patrol vehicle and informed them about what happened.

“I am so grateful to the police for rescuing this truck and the product. If not, the owner would have sent me to jail that I sold his goods, whereas, it was armed robbers that took them.”