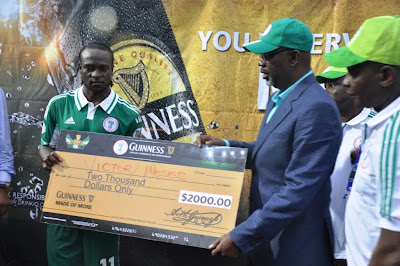 Official sponsor of the Super Eagles, Guinness, has announced a $2,000 reward for each goal scored by the senior national team against Malawi in the 2014 FIFA World Cup qualifying game scheduled for Calabar on Saturday. 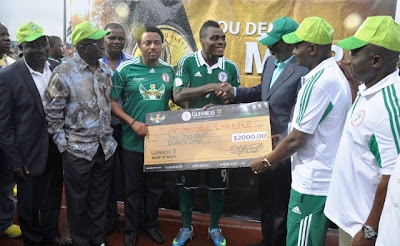 Reassuring Eagles of its unwavering support, Guinness is urging the African champions to go for goals and qualify for the 10-team final elimination round, where a two-leg knock out fixture will determine Africa’s five flag-bearers at the tournament to be hosted by Brazil in 2014.

According to the Marketing and Innovation Director, Guinness Nigeria Plc, Mr. Austin Ufomba, Guinness believes strongly in the ability and determination of the Super Eagles to qualify for the next round of the qualifiers.

“The Super Eagles have the potentials to defeat the Flames of Malawi and progress to the next round in this qualifier because a team hinging on the massive support of millions of Nigerians behind them is truly a team Made of More. Since the team won the AFCON, they have shown tremendous progress that leaves no one in doubt of their capabilities. We are enthusiastic that with team work, technical and tactical discipline the Super Eagles will fly,” Ufomba said.

He continued: “We want the Eagles to make Nigerians proud once again by scoring enough goals to qualify for the next round and eventually the grand finale in Brazil next year. We threw our weight behind the team during AFCON 2013 and we were not disappointed as the team delivered the AFCON to the delight of millions of Nigerians. This time around, we are again giving them our massive support and we hope we will all sing the same song of victory”.

As a way of galvanizing support for the team, Guinness will be giving out free tickets to fans to watch the match live at the U.J Esuene Stadium. Also, fans can visit the Guinness Facebook page at facebook.com/guinnessvip or m.guinnessvip.com to predict scores for the match and win fantastic prizes.

Marketing Manager, Guinness, Mr. Obinna Anyalebechi, further added that, “Aside winning fantastic prizes, the Guinness fan park located within U.J Esuene Stadium will provide our consumers and fans of the Super Eagles unforgettable experiences worthy of a match of this magnitude. So, we urge all fans of the Super Eagles to show their love for the team by coming out massively to the stadium to watch the match hoping for the best. We also encourage all our consumers to enjoy their Guinness responsibly at all times.”