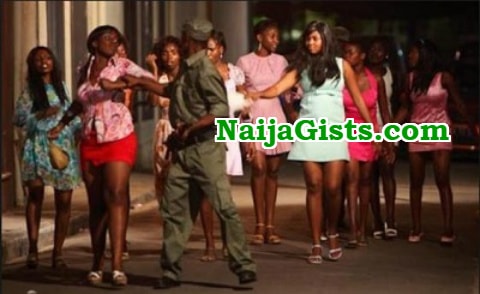 27 Prostitutes Arrested During Raid On Abuja Hotel Fined For Prostitution

On Monday the 29th of April 2019, a mobile court in Abuja sentenced 27 women to one month in prison for prostitution.

The convicts, who were arrested last Wednesday and Thursday, were, however, given an option of N3,000 fine each.

Their lawyer, Jennifer Ogbogu, explained that the sex workers pleaded guilty to the charges against them and were summarily convicted and sentenced.

She said, “The ladies were arraigned before the mobile court for prostitution and were each sentenced to three months in jail with an option of N3,000 fine. We have just paid the fine and all of them have been released from custody.”

The acting FCT police spokesman, ASP Gajere Danjuma, confirmed to our correspondent that 65 ladies were arrested by the task force set up by the FCT minister, adding that 38 were released after they were profiled.

An activist, Martin Obono, who claimed to have witnessed when the women were brought to the Utako Police Station, Abuja, on Saturday, alleged that some of them were sexually abused by the security officials.

Obono, in a tweet on his Twitter handle, wrote, “Some have been assaulted with injuries in their private parts. One of the ladies arrested has a two-month-old baby. She was not allowed to breastfeed her baby despite continuous plea amid tears.

“It took the intervention of a female police officer who called the DPO to overrule the decision of the inspector at the time. The joint task force that arrested some of these girls have been allegedly molesting and assaulting them. Some even showed the bruises in their private parts.”

But the spokesman, FCT Social Welfare Secretariat, Sunday Shaka, denied the allegation, insisting that there was no way the women could have been sexually assaulted during their arrest.

He said, “The operation was jointly carried out by the police, operatives of the Nigeria Security and Civil Defence Corps, and other security agents and it was not a secret raid. So, there was no way the women would have been sexually assaulted because after they were arrested, they were taken to the Utako Police Station for profiling after which those who had no case to answer were released, while the others were detained and a charge prepared for their prosecution.”