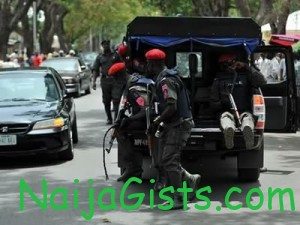 The Suspected Boko Haram militants launched the attack with explosives and rifles around 2:00 am (0100 GMT), leading to a shootout with police and troops, Lieutenant Lazarus Eli said.

“The (military) was promptly alerted and reinforced the police in repelling the attack by Boko Haram terrorists on the police area command,” he told AFP.

“The DPO (Divisional Police Officer) died in hospital from gunshot wounds he sustained in the shootout while three bodies of the terrorists were recovered, although the terrorists took away around 10 of their men killed in the encounter,” Eli claimed.

Residents of Potiskum said explosions and gunfire echoed through the town for over three hours.

The Boko Haram militants also burnt a bank and looted a store, residents said, but Eli declined to comment.

Potiskum, the commercial capital of the state, has been repeatedly hit by deadly Boko Haram attacks in recent months, leading to heavy military crackdowns in which dozens of sect members were killed or arrested.

Violence linked to Boko Haram’s insurgency has left some 3,000 people dead since 2009, including killings by the security forces. (Credit: PM)