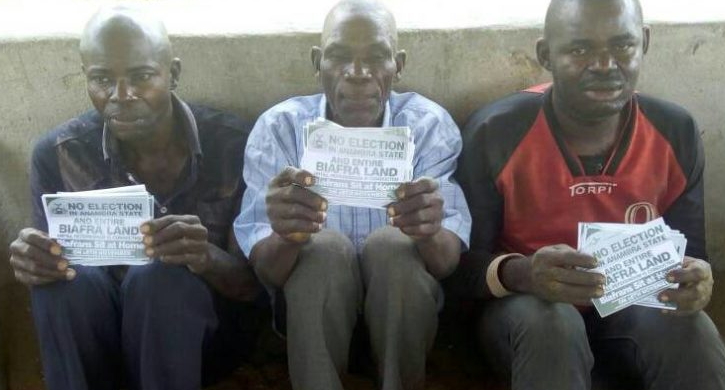 Nigerian army personnel attached to 144 Battalion under 14 Brigade, Ohafia, Abia State have reportedly arrested three members of the proscribed Indigenous People of Biafra ( IPOB ) in Aba, the commercial nerve of the State.

The suspects whose names were Mr. Nwagbougwu Okeke, aged 55yrs, Mr. Chidiebere Nwaoha, aged 35yrs and Mr. John Nwaogazi, aged 50yrs were said to have been arrested by the soldiers on patrol in Aba on Sunday.

Sources within the battalion told our reporter that the IPOB members were arrested Sunday morning around Alaoji Fly Over.

The suspects according to a source said that they were caught distributing flyers and posters with caption “No Election In Anambra State”.

The source said that the suspects and flyers have been handed over to the Department of State Security for continued investigation.

A senior officer at the battalion who craved anonymity said that the 14 Brigade would continue to work in synergy with the police and other sister agencies to flush out criminality and anti social activities within the State.

The officer urged members of the public to inform the army and other security agencies of the activities of criminals and hoodlums in their locality, stressing that they would make criminality unprofitable in the state.