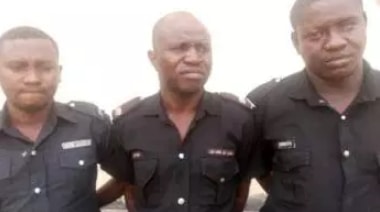 The Lagos State Police Command on Tuesday said it had arrested three of its officers, posted near a commercial bank in Opebi area of the state, for allegedly gambling while on duty.

SP Chike Oti, the Command’s spokesman in a statement, said that the officers were arrested following a viral online media report that exposed them.

“The attention of the Lagos State Police Command has been drawn to the news making the rounds on a social media platform that policemen stationed near Zenith Bank, Opebi, Ikeja, Lagos, were seen counting bribes received and smoking.”

“Based on the allegation, the CP Lagos ordered for their arrest, detention and trial.

“Meanwhile, preliminary investigation into the case revealed that the men weren’t counting bribes received as alleged but coupons they collected from a game of gambling they played.

“The men are currently facing disciplinary action that could lead to reduction in rank or dismissal. It is wrong to engage in such distracting activity while on duty,’’ Oti said.

The police spokesman said that the Police Commissioner, Mr Edgal Imohimi, urged members of the public to always expose indiscipline and unprofessional policemen.