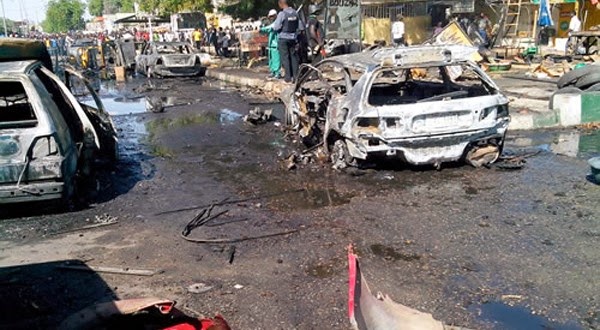 The alleged mastermind of 2 bomb explosions at a TV viewing center in Maiduguri on Saturday has been arrested.

He was picked up on Sunday by the military after a massive combing of the city.

He was said to be one of those who generated the explosives which killed more than 50 people in the troubled Borno State capital.

A probe of the Maiduguri incident was on yesterday in Abuja, forcing top military leaders to hold a long review session.

A source in the military admitted that some of those injured in Saturday’s explosions had died, leading to the rise in the death toll.

The troops and Boko Haram were locked in more encounters in Adamawa, Yobe and Borno states since. Friday. The battle in Mainok is described as fierce.

Following the encounters, 30 other Boko Haram members were picked up in Adamawa and Yobe states and taken into custody for interrogation.

A military source, who spoke in confidence on the Maiduguri explosions, said: “A suspect believed to be one of those who generated the explosions has been arrested and taken into custody for interrogation.

“He was picked up from his temporary hideout from where he had planned to run away from Maiduguri.

“The probe of the blast is ongoing; we are trying to study and analyse how they penetrated the tight security in Maiduguri with a van conveying firewood. We have also beefed up security to prevent a reoccurrence.”

The source said the success of recent air raids accounted for the reprisals by Boko Haram.

“Due to persistent air strikes, these insurgents were dislodged from their bases and cells or camps. In frustration, they sneaked into Maiduguri to wreak havoc.”

Asked of the update on those killed, the source admitted a rise in the death toll.

“The death toll must certainly be from those wounded,” the source added.

“Some of these fighters were also picked up in border towns and villages in their attempts to escape to their camps in Cameroon.

“We have found on them fighting weapons; they are undergoing intense grilling in some designated centres.

“Some of them were behind recent attacks on villages and towns in Adamawa and Yobe states.”

Yesterday, the Air Force continued its air strikes of identified camps and bases of Boko Haram.

Defence Headquarters spokesman Maj.-Gen. Chris Olukolade said: “Somebody was arrested in connection with Saturday’s explosions in Maiduguri. Investigation is in progress.”
[By Yusuf Ali, The Nation]