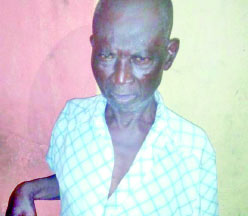 80-year-old Pa Pius Ajaegbu is agonising right now. He is suffering from enlarged prostrate – a condition that does not allow him pass urine unless with the aid of a pipe fixed to his bladder. He developed the condition at Badagry Prison, Lagos, following his incarceration.

Pa Ajaegbu, who lost his wife last year, was one of the hundreds of people that the police in Lagos arrested during a massive crackdown while hunting for the killers of a policeman in Mushin area of the metropolis.

According to reports, the policeman was killed during a clampdown on hoodlums and drug users in the densely-populated area. The police were irked by the effrontery, so, they fanned out across Mushin, Itire and Odo Eran areas and arrested about 256 people.

The police, operating as members of the Lagos State Environmental Task Force, took their victims to a mobile court, obtained remand warrants for each of them and dumped them in Kirikiri and Badagry prisons.

Daily Sun learnt that the police operation began on Wednesday, February 28. There was allegedly no profiling of the victims to sieve the innocent from the villains, leaving most people suffering needlessly, with some spending over one week in jail.

Daily Sun was told that Pa Ajaegbu, who is also diabetic, was to travel for medical treatment days before his arrest. While in detention, his health deteriorated, making him unable to pass urine naturally. Warders, fearing for his life, took him to the hospital and contacted his family, urging them to facilitate his release.

Days after Pa Ajaegbu’s return, the correspondent visited his Itire home to hear how things went down.

“At about 7pm that fateful day, I had returned from the school where I do security work. After some rest, I strolled out to buy some roasted yam for dinner. Just as I was handing the lady a N200 note, trouble erupted. A truck pulled up. Some policemen were shouting ‘grab them; grab them!’ One of the policemen held me. Another gave me a mighty push. I cried out in protest, wondering what I did to warrant my arrest, but they didn’t listen.

“One of the policemen gave me two quick slaps across the face. As I continued to protest my innocence, another one responded with another round of slaps across the face. Dazed, another one began to hit me in the groin with the butt of his gun. Then I collapsed. In that confusion, I lost my N200. One of the policemen grabbed my footwear and flung it afar. They pulled me up quickly and hauled me into the waiting truck where I sat dazed, panting and wondering what I had done to deserve the treatment.

“From that point, they began to drag in more people. One of them was a kid who was going to deliver some loaves of bread at his mother’s shop. The lad was still carrying the loaves and people who had money on them later bought from him and ate.

“In a short while the truck was full; there were no fewer than 50 of us. We were driven straight to the Lagos Police Command in Ikeja. It was about midnight when we arrived. They made us to sit down on the turf; we later wrote down our names on a sheet of paper.

“The policemen who received us were furious. They said they were angry because we denied them sleep; that they ought to be sleeping about the hour but we kept them awake and, for that reason, we would know no sleep.

“Soon, they brought in more people in trucks. They made us all to sit down in the open field. We remained there till morning and were later paraded with journalists taking our pictures. They also brought in bags of Indian hemp they allegedly seized from hoodlums. From that point, they loaded us again into a truck and took us to Bolade, Oshodi.

“When we arrived at Bolade, for hours, they made us sit down on the floor with the sun blazing. They called our names and later marched us in batches of 10 into a mobile court on the premises. One after the other, they asked everyone, ‘are you guilty or not.’ Nobody admitted any guilt. The magistrate sat there listening, saying nothing.

“In the evening of that same day, they loaded us again into a truck and then took us to Badagry Prison. About 10 people were shown a room to sleep. They threw three mats at us, which the cleverer ones grabbed.

“Between when I was arrested and when we arrived at the prison, I neither ate nor drank anything. The hours were harrowing. In all my years, I have never experienced anything like that.

“The next day, I observed that my groin was aching. I was also experiencing some swelling in the area and could no longer pass urine. I was alarmed, and I drew the attention of a warder. Seeing my condition, he took me to the clinic. When the doctor examined me, he asked them to rush me to Badagry General Hospital. At the hospital, the doctor inserted a tube into my bladder to enable me pass urine. I’m still carrying the device.

“Before now, I was getting ready to go for hernia surgery. But now, the police have brought me another trouble. Where do I go from here?”

When the correspondent first learnt of Pa Ajaegbu’s arrest, he launched out to free him. It was a move that saw him going to Bolade, Oshodi, to see either the chairman of the task force, Mr. Saheed Egbeyemi, a superintendent of police, or the agency’s public relations officer, Mr. Toafik Adebayo.

In the mid-morning of that Thursday, the sun was already up in the sky, blazing intensely. No fewer than 300 people had massed, spread out in front of the gate to the task force office. Some of the people were pensive, some restive. Every one was intent on squeezing through the gate to commence proceedings for the release of their loved ones. Those who made it through congratulated themselves.

Inside the expansive compound, a lot of activities went on. There were lawyers hustling for briefs to free detainees, just as workers and all manner of people paced about for one thing of the other. There were hundreds of suspects sitting on the ground in rows. Further down was a mobile court as well as a detention facility too. To free a suspect was one huge process, it was learnt.

At that point, the correspondent struggled to enlist colleagues, soliciting that they sent word to the Lagos State Commissioner of Police, Mr. Imohimi Edgal, to free Pa Ajaegbu.

Between Friday, two weeks ago, and Monday, the week following, nothing happened. Mr Edgal, it was gathered, had sent kind words to his subordinates to initiate the process to free Pa Ajaegbu. But it appeared his words were lost down the line.

On Tuesday, March 6, nothing happened. So Mr. Edgal was contacted again. At that point, it became clearer that freeing a suspect from the facility was a long walk.

Part of the condition was that relatives of the suspect must provide two sureties who must be civil servants on Grade Level 7 and above working with the Lagos State government. They must come with their utility bills, letters of employment, passport-size photographs, and their identity cards. Relatives of detainees had to hire personal lawyers and pay the compulsory sum of N10,000 via POS.

While the process was underway, a call came from a warder at Badagry Prisons requesting Pa Ajaegbu’s daughter, Ifeyinwa, to hurry down and evacuate her father as he was gravely ill. Upon hearing the news, she broke down, weeping uncontrollably.

A day before, she had visited her father to see how the old man was faring.

“It was such a task,” she said, shaking her head. “I had to offer tips at every turn before I was let in. From there, I fought to secure him a more comfortable room to sleep.”

With Pa Ajeagbu’s release conditions met, a lawyer proceeded to secure his release warrant. The lawyer earlier contacted had demanded N100,000 to get two people to stand as surety. The sum was outside his legal charges.

At the moment, Pa Ajeagbu is free. But he lives with two burdens: the trauma of his ordeal straddling his wounded soul and the pain of an enlarged prostrate weighing down his frail frame. With a longing to undergo his hernia operation still hanging – and for which he is still looking for money –the man is evidently distraught.