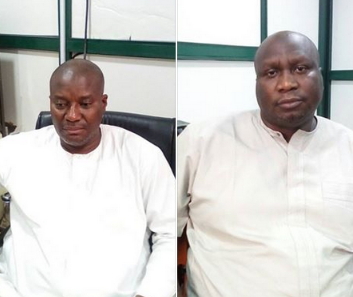 The National Agency for the Prohibition of Trafficking in Persons (NAPTIP) has arrested operators of two high flyer travel and tour Agencies based in the Federal Capital Territory (FCT). They are: Mr. Ibrahim Wali, Managing Director and Chief Executive of Family Travel & Tour Limited and Mr Nasiru Musa Jubril, Chairman and Chief Executive of Divine Travel & Tour limited. They were arrested for alleged trafficking of 96 Nigerians to Saudi Arabia using the 2017 Hajj exercise.

The red flags were raised recently by the National Hajj Commission of Nigeria (NAHCON) in a letter of complaint against Family Travel & Tour Limited which applied for and got allocation to take 450 persons to Saudi Arabia during the 2017 Hajj Exercise.

However, months after the Hajj operations ended the company is unable to account for 96 of the people and every attempt to get the company to bring the people back has proved abortive.

In the course of the investigation, Mr. Wali alleged that it was his friend Mr. Musa Jubril that used his company to transact the business. The two suspects are making useful statements as investigation continues. It would be recalled that NAPTIP had last Friday raided a popular hotel in Abuja where suspected victims of human trafficking and labour exploitation were believed to have been kept by some operators of some travel & tour companies prior to their departure.

At the end of the sting operation, 13 persons suspected to be victims of human trafficking and labour exploitation were rescued while two suspected traffickers were arrested. The facility was subsequently sealed up by the Agency.

Speaking on the arrest, Director – General of NAPTIP, Dame Julie Okah – Donli, warned travel & tour operators in the Country to desist from recruiting innocent Nigerian for sexual and labour exploitation adding that their actions are inimical to the development of the nation.