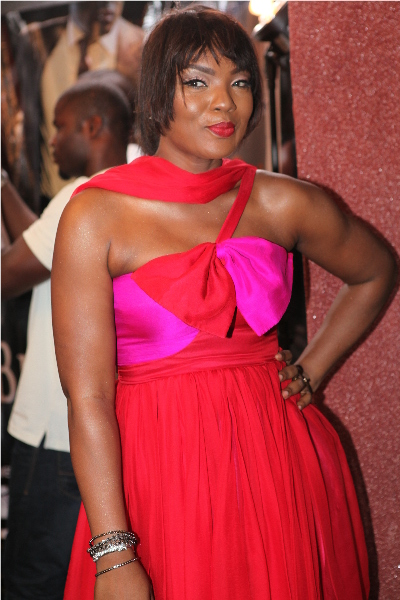 May 18, 2013 – Actress Chioma Chukwuka Akpotha: “Why I Married My Husband Secretly”

Chioma Chukwuka Akpotha is one of the popular Nigerian actresses, who has done quite well for herself in the industry since she joined in 2000. With over 50 movie roles to her credit in the last 13 years, the actress recently joined the world of producers with her debut flick, On Bended Knees. She spoke to Movie Moments’ Mutiat Alli on her life, people’s perception of her been arrogant and her hubby.

How do you feel as a new entrant into the world of production?

I can’t really explain how I feel because this a dream I have nurtured for so long and seeing it come to reality is just like a dream come true to me and perhaps the reception has been immeasurable considering the fact that it is my first major production as a producer.

What actually prompted your decision to turn producer over night?

I want to correct that impression of me turning into a producer over night simply because I have been in the industry for quite an age now and for me to produce a movie of my own is just to let the world understand the fact that even been an actress; I can as well turn out to be fantastic producer and that has been my dream for a very long time.

On Bended Knees is directed by good hands; what formed your choice of selection?

I feel they both understood what I was looking out for in the production of the movie; so having Emem Isong and Lancelot Imasuen as my directors is the greatest thing that happened to me because they both believed in my dream. Even at the time of giving up on the production; they were both there to encourage me and at the end of it all I was able to have a fantastic movie.

What is the movie all about?

On Bended Knees is a movie very dear to my heart. It’s a captivating story of a young and vibrant man who relegated his duties as a husband and the man of the house to the background. His wife, ignored and lonely, finds comfort in the company of her boss. It is discovered that the wife is having an affair with her boss and things take a new twist. This story happens every day even in the midst of the “seemingly” perfect relationships. It’s a movie every home should have and watch.

Considering when you started in the industry; what is your view on the standard of movies been produced in Nigeria presently?

Well professionally, I started acting in 2000 and there is a far difference between the kind of films produced now and back in the days; I can authoritatively say it loud and clear that the Nigerian movie industry has been impressive considering the kind of equipments we now use in shooting our movies. Also, we have been able to meet up with international standard. I believe the sky is our starting point and definitely not our limit.

You have managed and maintain an almost scandal free reputation; how have you been able to manage this?

I feel it has been the grace of God because we all are not created perfect and as such we just manage to be our self and be of the best behavior.  I just feel being an actor opens you up to controversies, scandals and all that. Maybe I’ve just been lucky.

You turned 33 just last month. Looking ahead, what do you hope to have achieved by your next birthday?

I hope that by my next birthday, I would have done another movie and grown from this level. There is no stagnancy in the industry. If you don’t see an actor for a period of time in movies, it doesn’t mean they are not doing something. Some are directing, some are producing, some are rebranding. There is no dry moment. For me, I want to move to another level by my next birthday.

As a married woman, what has marriage taught you?

I have learnt a lot from been a married woman because it only take the Grace of God for two people who are completely different to stay together for the rest of their lives. One major thing I have learnt is patience and perseverance. One needs to tolerate one another.  I and my husband not just see ourselves as been married; we are also friends.

Much has not been said about your husband; how will you describe him and why haven’t we been seeing you two together?

I have got the best husband as a friend and the father of my children; he is loving, caring and has been supportive of my career and for not seeing him around me; it’s our mutual agreement to make our marriage private. We are happy and our source of joy been our children.

What is that one impression that people have about you and you would like to correct?

Definitely it’s going to be on this issue of me been arrogant which I know I am not; I strongly believe in the saying that you don’t judge a book by its cover. I guess people of that impression are people who don’t know me or aren’t closer to me. I am not arrogant.