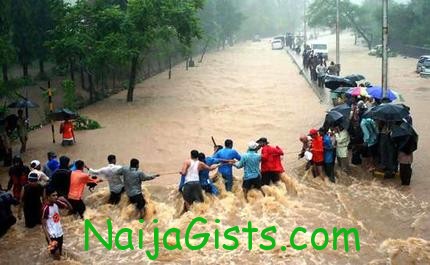 Residents were seen fleeing Maiduguri city in Borno State on Wednesday after a very heavy rainfall that displaced over 10,000 people.

The heavy rainfall we learnt caused over 500 dead bodies to be washed up from their graves at cemetery in the capital city yesterday. The downpour also caused damages in millions of Naira.

Dead Bodies Washed Up From Jajeri Moslem Cemetery In Maiduguri

The dead bodies (over 500) were washed up from a popular cemetery, Jajeri Moslem Cemetry in Maiduguri which caused thousands to flee the city.

A 10-year-old, who was buried two days ago, was also washed up.

The rainfall, which started at 5.00pm, Wednesday, stopped at 7.00pm; continued again by 2.00am till 6.00am, yesterday. The down-pour was said to be the heaviest in the state since the commencement of the rainy season.

Most of the residents in these areas had to stay indoors. Others were seen evacuating their property and laying the items under the sun and on trees to dry.

Mallam Bukar Maina, a resident, said the affected people have met and unanimously endorsed a letter to Governor Shettima to come to their aid.

Maina said: “This is not the first time we have taken our complaint to the governor on the devastating effect of flooding in the area due to our proximity to River Gadambul. But all our cries fell on deaf ears. We hope this time around the governor will listen to us.”

One of the victims of the flooding in Bullumkutu, who is a senior civil servant(names withheld), said the state government, under Governor Kashim Shettima, was paying lip service to the environment sector.

A woman, who gave her name as Hajiya Asabe Umara in Bolori area, described the situation as very pathetic and destructive.

She said: “It is by the grace of Almighty Allah that I was able to deliver a baby boy in our house this morning(yesterday).
“The massive flooding prevented any vehicle from coming to take me to a nearby hospital.”

Meanwhile, Governor Shettima has said the state government has awarded contracts worth N14 billion for the construction of roads and drainage in Bullumkutu, Dala, Abuja Talaka, Bullumkutu Tsalake, among other wards of the metropolis, to check flooding.

He said: “It is unfortunate that apart from some of my valuable documents and property which were destroyed, some section of my only hard-earned two bedroom bungalow was brought down by the flood. I am now totally confused as I have nowhere to go to with my family of 10.”(vanguardngr reports)