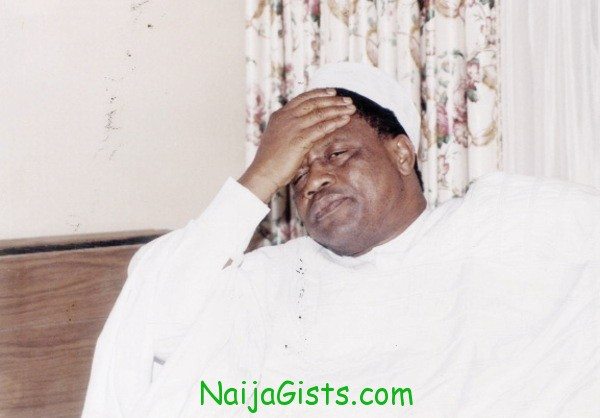 NaijaGists.com just learnt that there is palpable fear in the home state of  the former military President, General Ibrahim Badamosi Babangida, over his failing health.

According to Naijan.com sources, the former Nigerian Head of State has been in a very unhealthy condition for some time and that the situation was being managed by medical experts, only for the condition to get worse over the weekend.

Rumours of Ibrahim Babangida’s death surfaced in some part of the state over the weekend. However, we can confirm that he has been rushed to Germany for a better and more intensive medical treatment.

As at now in Minna, Niger State, the home state of the gap-toothed general uneasy calm pervades the air, as the people there are not sure of the true state of things about their beloved son, who held sway as Nigeria’s military president for almost a decade.

The executive governor of Niger State, Mu’azu Babangida Aliyu, had to cancel his 56th birthday anniversary at the last minute, when the news got to him that the man popularly known as ‘Maradona’, was ailing fast and needed urgent attention. Upon this, the governor, who is also the chairman, Northern governors Forum, quickly made for Germany last Wednesday to visit Babangida on his sick bed. It is also believed that IBB’s family members and associates have gone into serious prayers to ensure the speedy recovery of their father, friend and mentor.

Ibrahim Babangida, you will recall, has been suffering from a perennial leg disease for years now, a condition which he has been managing even long before he stepped aside. He was said to have picked the ailment after the civil war during which he served Nigeria diligently. There is also an alleged cancer affliction which he has been suffering for sometime but kept under wraps. What particularly lends credence to IBB’s current ill-health is that he has not been visible or heard of in many public functions for months and efforts by many of his close associates to get in touch with him were always rebuffed. A top military brass who would not want to be identified, said, “I don’t know what is happening to Oga, because I have been trying to get in touch with him for months now without any result”.

The true situation of IBB’s health remains cloudy as no one contacted at the Niger State Government by this magazine was willing to make a positive statement on the true situation. As at the time of going to press however, we gathered that IBB is still on his hospital bed in Germany being intensively attended to by medical experts.

The judgement of God is just starting on him.