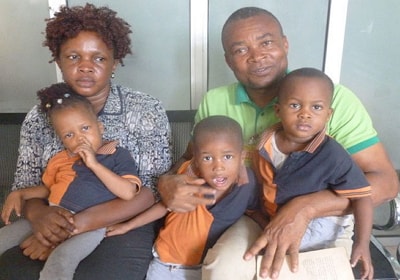 Mr and Mrs Ifeanyi Amadu’s family has cried out to well-meaning Nigerians and the general public to come to its aid to enable it to survive. Everything for them became topsy-turvy after they had expended their fortune on medical treatments for their triplet-Prince, Praise and Precious.

Mr. Amadu, an indigene of Anambra State who, with his wife and six children, resides in Ajegunle in Lagos State said: “I was selling jewelleries in Idumota Lagos before the birth of my triplets. But when we gave birth to them, they were sick as the doctors revealed that two of the babies exerted their weights on the third child while in the womb. In order to save the life of the baby, I had to spend all my money on him. I also ensured they survive because I love my family.”

Amadu added that it was hard to feed his family of six, adding that the first two of his children and the triplets have stopped schooling because, “I cannot afford the fees again”.

“As an Igbo man, I cannot fold my hands and watch my family suffer. So, I have to do menial jobs to provide food for my family. I go to Idumota where I had my shop before; if there is no menial job available I just sit with friends. I have been receiving helps from my friends, but for how long will that continue. That is why I am pleading with public-spirited Nigerians to assist me. If they can help me raise money to start my business afresh I will be grateful.”

Amadu lamented that families and friends have tried their best and they are tired. That’s why I have come out to cry to the masses and government to help me. I have business acumen but I cannot do anything now because I do not have money to begin another business. I plead with fellow Nigerians to assist me. If they help me, my children’s future will be guaranteed.’

“After the delivery of the triplets, they fell sick. We spent almost two months at Ajeromi General Hospital, Ajegunle. Their health conditions weren’t getting better. My husband was at the hospital with me to take care of the children, even as he also takes care of the home front, because of the other two siblings.

“During that period, the building containing my husband’s shop was under construction and the shops were put out for rent without my husband’s knowledge.

“That development compelled him to convert his Sienna car for commercial use so that he could raise money for the family’s upkeep. But the vehicle developed fault and he took it to the mechanic shop. One day, the mechanic called to tell us that the vehicle had been towed by officials of the Lagos State Traffic Management Agency (LASTMA). We tried all we could to recover it, but we couldn’t till date. That dealt a terrible blow to our survival and livelihood.”

“I was a teacher before I was delivered of the triplet. I have no savings because while my husband was trying to sort out the issues of the shop and the vehicle, we had to fall back on my savings to keep body and soul together,” she said.

Mrs Amadu said as a mother who values education, “it is hurting my spirit that none of my kids is going to school because of lack of money to pay for tuition. That is why we are pleading to the general public and well-meaning Nigerians to come to our aid, because there is nothing again to survive on.

The triplet and their siblings are out of school because we can’t afford school fees.”

If anyone is touched by the family’s unsavoury story, assist them to stay alive.

His bank details are as follows: