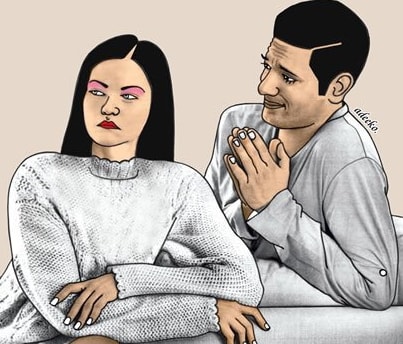 A woman, Yemisi Muhammad on Wednesday urged a Mushin Customary Court to dissolve her marriage because of what she called “frequent assault” by her husband.

The 49 year old businesswoman, told the court that she was no longer interested in the 18-year-old marriage to Bashiru Muhammad, a journalist.

According to her, Muhammad started maltreating her when she became pregnant with her first child. She said she ended up with a stillbirth because of the “intense assault.”

“On a fateful day, while I was pregnant with my first child, I was in the kitchen cooking, while my husband was watching ball in the sitting room. I went to him that I was feeling dizzy but he gave no attention to me, I went back to him the second time, but he got annoyed, called me names and beat me till I hit my stomach on the floor.

“After some days I realised my body was getting swollen and my stomach shrinked by the day, so I told my husband who took me to the hospital. It was there we found out I have been carrying a dead baby. Even after that, he never stopped beating me,” she said.

She said she endured his maltreatment for over 10 years because she did not want to go against her mother’s wishes.

“I am the only survivor of my mother’s seven children, and all my mother ever wanted was for me is to remain in my husband’s house and never to have more than one husband.

“All I want now is peace of mind, he has been threatening my life. I am hypertensive; please I can no longer handle his maltreatment and beating. All I want is divorce; I want to be set free.”

Muhammad denied the allegations, saying: “I have never for once beat my wife. We are two different people from different background; so it’s normal to have differences. Truly, we fought over things we should not fight on, but it never got to the stage of beating my wife.

“I wouldn’t have married my wife at all if I hadn’t loved her. I was warned that she is promiscuous. Yemisi left my house not because I assaulted her, because I never did, she left on her will.”

Yemisi, he said, had been denying him access to his children since 2014.

“Yemisi left my house in 2013, and tricked me into having custody to my children in 2014. And ever since then, she has been denying me access to my children, which I never did to her while the children were with me,” he said.

The case continues on September 4.

Continue Reading
You may also like...
Related Topics:divorce, husband, wife