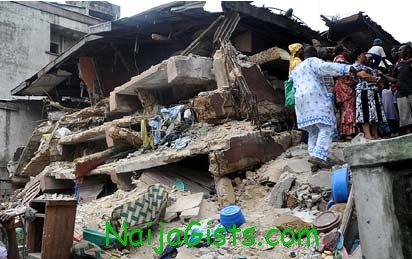 At least 3 people were killed on Saturday December 31st, 2011, when an uncompleted building collapsed at Ileshomi Street, off Bobayanju Ewutuntun, Mafoluku, Oshodi, Lagos. Several others were reported injured. naijagists.com

It was gathered that the building had been uncompleted for years and its ownership had changed three times. It was undergoing repairs when it caved in.

The Training Adviser, Red Cross Society, Oshodi/Isolo, Daniel Blessing, said three bodies and five persons had been evacuated. They were searching the rubble for more, he said.

The dead are Andrew, Felix and Yusuf.

A survivor, Toju, was injured in the hand.

Another, Musa, said he crawled out of the rubble on his back, adding that there were dead bodies all around him.

Another victim was unconscious when he was evacuated.