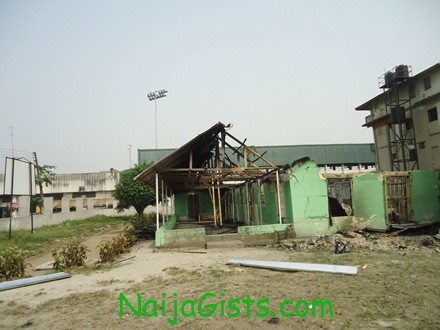 Church of God Mission that was burnt this morning.

Though the motive behind the action could not be ascertained, it was gathered that the arsonists set the church building on fire using petrol bomb.

They used clothes that were tied together in form of a rope, soaked it in petrol and ignited it.

The fire began at about 2.00 a.m and razed parts of the building before the arrival of men of the Rivers State Fire Service at about 3.00 a.m.

It was pitiable sight to behold when our correspondent visited the scene of the incident.

Some worshippers of the church were seen in groups discussing the incident.

The pastor of the church, Pastor Damiete Princewill, explained that the incident has been reported to the Central Police Station (CPS), about 500 metres away from the Rivers State Police Command Headquarters, Moscow Road, Port Harcourt, while policemen from the station have visited the church to investigate the incident.

Princewill stated that the fire incident was a clear case of arson as there were evidences to show that the building was actually set on fire by arsonists without a clear motive.