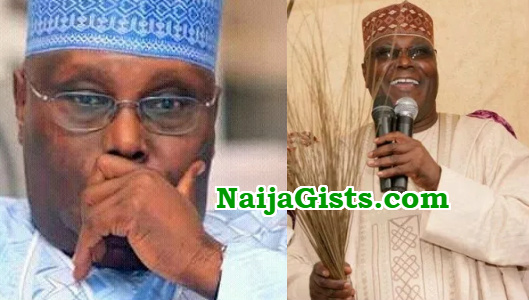 Nov 23, 2017 – Atiku Abubakar Dumps APC, Returns To PDP To Get Presidential Ticket As Buhari Blocks His Main Source Of Income

Ex-vice president, Alhaji Atiku Abubakar, will tomorrow register at his Jada 1 ward in Adamawa State, to begin his formal return to his former party, the Peoples Democratic Party (PDP).

This is expected to be followed with a formal defection on December 6, ahead of the party’s December 9 national convention, where he is also expected to be physically present.

We also gathered exclusively that all formal arrangements had long been made to make his return to his former party seamless.

Part of the arrangements, it was learnt, was to hand the party machinery in the state over to his loyalists.

“And from the outcome of the congress we held about two weeks ago or so to elect state party officials, his men emerged the new party leaders in the state. If you recall, Dr. Ardo, a very strong member of the party in the state, protested what he termed ‘connivance’ of the national secretariat with Atiku to make his (Atiku) men take over the party in the state. He made a lot of noise in the media over the issue. But did you hear anything?” one of sources in Adamawa queried.

Atiku’s return to the PDP is a confirmation of Daily Sun’s report of November 14, where it reported among others things that plans were on by the PDP to woo top All Progressives Congress (APC) chieftains to its fold, as part of its strategies to sack the APC from the cenre in 2019.

Although Daily Sun could not readily ascertain if Atiku got any assurance from the party that he was going to get the party’s presidential ticket, handing him the party structure in the state was Atiku’s own way of ensuring that the events of January 2011 and December 2014 respectively, does not repeat itself, another source volunteered.

Daily Sun recalls that in 2011, Atiku as a northern consensus candidate was not only defeated by Goodluck Jonathan in the PDP presidential primary election, he also lost all the delegates from Adamawa State to Jonathan.

Daily Sun further gathered that with Atiku’s formal return to the PDP, the dynamics within the ruling APC is also expected to change, as most of his loyalists currently in government and in the party are expected to join him in PDP in the days ahead.

Already, current Women Affairs Minister, Senator Aisha Alhasssan had long given Buhari notice that she would be backing Atiku in 2019. She is one of those expected to return to the PDP.

Also, Adamawa State governor, Senator Jibrilla Bindow, whose influence within the APC in the state has been effectively neutralised by both the Murtala Nyako and Buhari groups is expected to join Atiku too in the PDP in the months ahead.

But, a Deputy Director in the Atiku Media Office, Mr. Sola Sanni has dismissed the former vice president’s return to the PDP.

He told Daily Sun the story is just “the imagination of those concocting the story. This is not the first time we will hear of such stories. It’s simply not correct.”

Regardless, Adamawa PDP members are already agog in anticipation of Atiku’ s return to the party.

Although none of the party officials were unwilling to be quoted when contacted yesterday, the state PDP chairman, Ahmed Tahir Shehu told Daily Sun that they would be happy to see the former vice president return to the PDP.

“We have been mounting pressures on him (Atiku); we have sent delegations to him on a number of times, pleading with him to return.

So, we will be happy to have him back,” Shehu said.