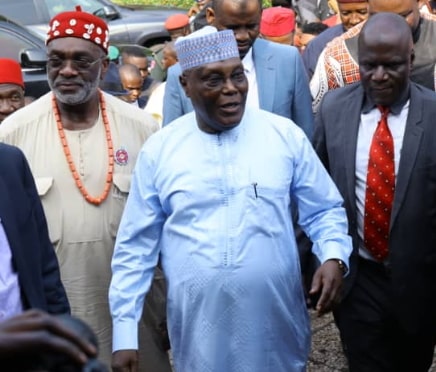 The Presidential Support Committee group has said that Igbo leaders who endorsed the Peoples Democratic Party (PDP) presidential candidate, Atiku Abubakar, are working to sabotage the chance of the Southeast to produce the President in 2023.

Its Southeast caucus spokesman, Charlene Adeasor, said in Abuja at the end of their meeting that Southeast governors and leaders were determined to subvert the aspiration of the Igbo people.

He said it is important that President Muhammadu Buhari should secure bloc votes from the region as part of the process marking the greater integration of Igbo into the ruling party.

“There was a time we had a press conference and said what our brother could not do for us in six years, Buhari has done under four years. Before Buhari came, one lane of the Enugu Port Harcourt road was almost covered with grasses. If you go there today, you discovered that the dual carriage way is being worked on. The one that shocked me is the Owerri Aba express road.

“In terms of infrastructure, we are witnessing what he think about the Igbo people. So, those who think that Buhari does not like the Igbo people are scared because these are the treasury looters. Buhari is a man who has the love of the country at heart and that is why we are doing everything to make sure he comes back.”

“I called them saboteurs because most of them have already taken side and I was the one that manufactured the word saboteur.

“The Igbos are trying to copy the South west who got the attention of Nigerians because they put their house in order when they voted for UPN enmass. Now that we are trying to move into the APC, you can see governors who we call saboteurs are trying to team up to make sure that the dream of the Igboman in 2023 does not come to light. That is why I label them saboteurs.

“The essence of this briefing is to let the entire pdp world know that we are ready for the next general election. We want to be our house together so that those who are in doubt as to whether President Muhammadu Buhari is in the south, they should know that there is a committee that is active in the south east with a strong determination to make sure he is reelected in 2019.

“We want to let the whole world know that we have capable hands that will work to make sure Buhari return to power. We are telling the PDP people that we are ready. The Igbos have made up their mind to give Buhari bulk vote in 2019.