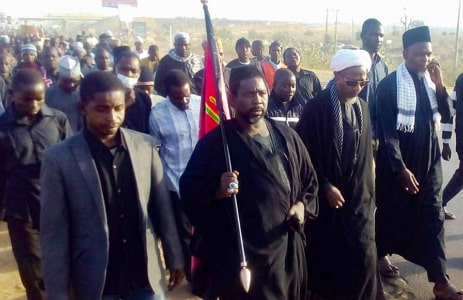 …..calls for immediate release of El-Zakzaky

The Acting National Coordinator of The Atiku Advancement Project, Barr. Soalabo West has condemned the security clampdown on the Shiite protesters who took to the streets of Abuja last week to demand the release of imprisoned Shia cleric, Sheik Ibrahim El Zakzaky.

In a statement made available to newsmen in Abuja, Barr. West warned that the crackdown on unarmed protesters put lives at risk and does not bode well for the nation’s nascent democracy which entrenches rule of law.

It was reported that several security officers from the army, police as well as civil defence on Monday dispersed the protesters as eyewitnesses said the officers fired teargas and gun shots into the air.

Videos and footage have also been released by eyewitnesses showing the dispersal of the protesters and how the law enforcement agencies were brutalizing them.

In the same vein, the ex-Rivers State Governorship aspirant has called for the immediate release of Ibrahim Zakzaky, tasking President Muhammadu Buhari to uphold the rule of law and obey court order, which has long ruled that the Shiite leader be freed.

Recall that President Buhari-led government has kept the Shiite leader in custody since 2015 when his group had an encounter with a convoy of the Chief of Army Staff Tukur Buratai, leading to the massacre of about 300 Shiite members, including Mr. El-Zakzaky’s sons. The cleric’s wife has also been detained since then.

“It is very sad that in this 21st century and democratic dispensation, peaceful protesters are still being clamped down. I believe that the Shiites should be allowed to exercise their inalienable rights to engage in demonstration provided it doesn’t pose security threats.

“They are human beings like us and they are also bonafide citizens of our dear country. Their fundamental human rights to religion, association etc should not be violated under Buhari-led government.

“As for the release of El-Zakzaky, on behalf of The Atiku Advancement Project, I urge President Buhari to be a law-abiding leader, have some respect for the judiciary, obey court order and immediately free El-Zakzaky,” West said.

Kenneth Okonkwo’s Anti Igbo Article: The Bitter Truth That Turned Barrister Okonkwo Against The Igbos
Donald Trump To Alter 14th Amendment Of US Constitution By Ending Birthright Citizenship To Babies Of Non US Citizens