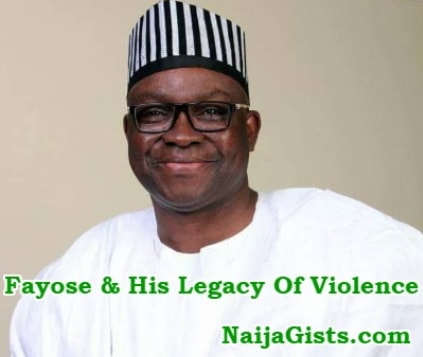 The Federal Government’s deployment of about 30,000 policemen and other security personnel to forestall any form of violence during last Saturday’s Ekiti governorship election has come under heavy criticism. With the whole of the Middle Belt region under siege and the daily harvests of deaths now spreading to north-western states of Sokoto and Zamfara while the Inspector General of Police, the Defence Minister and the DSS Director General wring their hands when not talking from both sides of the mouth, it is difficult to fault the argument of those who talk of misplaced priority by a government that has failed to adequately address security concerns of the governed.

Now that the election is over, I will like to join my fellow compatriots to demand President Buhari adopts the Ekiti template to confront insecurity issues around the country.

This however is without prejudice to President Buhari’s apprehension about violence during elections all over the country and most especially in the southwest. Those who should know better have argued the figure followed observed lapses during last year’s Anambra election conducted with 26,000 police officers. And the police represented by its spokesperson, Jimoh Moshood have also justified the figure when he appeared as a guest on Channels Television breakfast programme, Sunrise Daily early in the week. According to him “Ekiti is a flashpoint when it comes to politicking, you can remember what happened in the second republic; we don’t want a repeat of that”. Indeed, a journey through history will show election violence foisted on the west by “mainstreamers” such as NPC (1965) and NPN (1983) led to the collapse of both the first and second republics.

Representative government in form of holding office at the behest of the people within the Obaship traditional administration system predates imported representative democracy in Yorubaland. Resisting any form of imposition of leadership through Obaship traditional system or election rigging in Yorubaland is according to Professor Akintoye, innate in Yoruba people. This perhaps explains why Nigerian ‘mainstreamers’, such as NPC, NPN were violently resisted with Obasanjo’s 2003 ill-fated ‘mainstreaming’ finally settled by the judiciary in favour of the people of Edo, Ondo and Osun states after initial pockets of violent resistance.

This is why with fearless and short-sighted dangerous politicians like Fayose who has all through his political career been associated with violence, putting adequate measures in place to guard against outbreak of violence during last Saturday Ekiti governorship election became imperative.

First, Fayose was a product of the late Adedibu’s (the garrison commander of Ibadan) school of politics. It was from this highly respected Ibadan politician who started as a political thug that Fayose was picked up by Obasanjo who went on to impose him on Ekiti in 2003. Predictably, his first three years as elected governor was marked by violence and assassination of some of his party members. This plus EFCC allegation of N1, 2b theft levelled against him by EFCC led to his impeachment in 2006 (later declared illegal by Supreme Court in 2014).

His political resurrection in 2014 according to Temitope Aluko, his alter ego and self-confessed partner in crime, was made possible with ex-President Jonathan “providing $37m , 1,040 recognised soldiers and another batch of 400 ‘unrecognised soldiers’ brought from Enugu in addition to 44 special strike teams brought in (with) Toyota Hilux buses from Abuja and Onitsha.’ The April 2014 assault on Ekiti was according to him ‘led by the then Minister for Police Affairs Jelil Adesiyan, Musiliu Obanikoro, junior minister of defence, Brigadier General Aliu Momoh with another contingent of 12,000 mobile police men, 26 sniffer dogs,15,000 NSCDC personnel’. 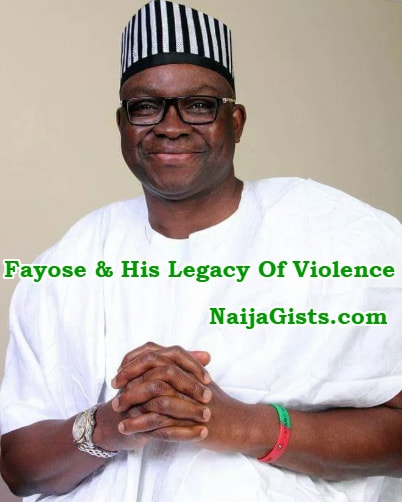 As a product of violence, his first action as a governor-elect in 2014 was to visit violence on the judiciary. It is on record that he was accompanied to court by thugs who beat up the judge presiding over his eligibility case. He also employed the services of the thugs to chase 19 elected members of the state House of Assembly out of town while he ran the state with seven PDP members. His hand-picked cronies went on to win the subsequent election into the state and national houses of assembly having driven serious contenders out of town with the help of thugs.

And if we needed other proof to show Fayose is a man of violence that needed to be caged, his activities during and after last Saturday electoral contest in which he was not a candidate provided sufficient justification for government’s deployment of a large contingent of police to Ekiti State.

Let us be charitable by not reading meanings into Fayose’s motive. Let us accept the police was overzealous for stopping victory rally of yet-to-be held election, which he had boasted his hand-picked candidate would win in spite of the electorate. But what are we to make of the madness of announcing the result of the election in the middle of the night while INEC, a body constitutionally empowered to conduct elections was still busy collating the results? Here again we have the National Broadcasting Commission that promptly terminated Fayose’s satanic broadcast designed to plunge Ekiti he has deceived and swindled for four years into a turmoil of fighting groups. 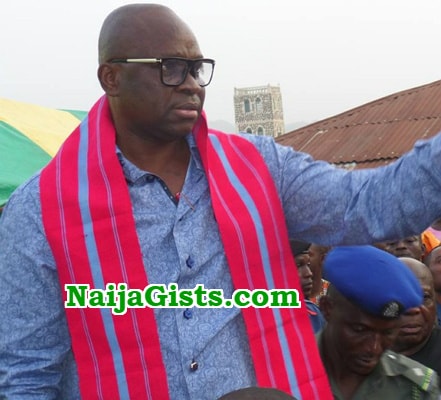 Back in April 2014, Fayemi in the interest of Ekiti people conceded defeat gracefully in an election he knew he couldn’t have possibly lost on account of his performance. In 2018, Fayose is goading the people towards violence after an election in which his hand-picked candidate lost in 12 of the 16 local councils of the state.

The truth about who really sets out to serve Ekiti people can be found in the Biblical King Solomon’s story. When there was a call for a sword to divide the child into two, the true mother said “give the baby to her, just don’t kill her” (Kings 3:16-28) Fayose has been the custodian of this baby for four years. But EFCC records show Fayose splashed all the monies he allegedly took from ex-President Jonathan on personal properties located in Lagos and Abuja rather than on the baby. Fayose who when not boasting, was quoting the Bible to decree and prophesy victory for his hand-picked minion forgets “God is not mocked, for whatever a man sows , that will he also reap” (Galatians 6:7.)

A few days to the election, Fayose was asked by Seun Okinbaloye of Channels Television to identify what he did for the Ekiti people in four years. His answer: “as a grass root politician, I was a few days back frying gari (cassava flour) with some rural women”. He conveniently forgot his greatest legacy-violence, by which he will be remembered by illustrious sons and daughters of Ekiti who fled home in the last four years.

Continue Reading
You may also like...
Related Topics:fayose, legacy, violence

Fayose Laments As Police Helicopter Conducts Aerial Surveillance Of Ekiti Government House
Fayemi: I Will Probe Fayose’s Financial Record To Find Out Why He Was Unable To Pay Workers Salaries