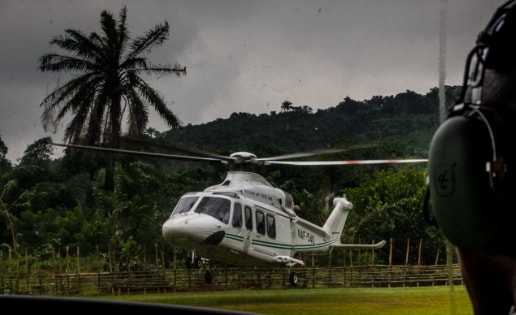 Fayose said the police chopper has constituted danger to his personal safety, his family, workers and visitors to the Government House.

He expressed dismay that aerial surveillance of his official residence and office has continued unabated even after the July 14 governorship election in the state.

In a statement issued on by his Chief Press Secretary, Idowu Adelusi, the governor described the development as “brazen show of naked force and abuse of power by the Federal Government.”

He also accused the nation’s security forces of allowing themselves to be used to intimidate political opponents despite being funded with tax payers’ money.

According to him, security agencies must be apolitical and not turned themselves to willing tools in the hands of powers that be.

He, however, vowed not to be intimidated by the alleged clampdown, adding that he would continue to speak against injustice and advocate for liberty of Nigerians.

“They continue to fly helicopters over the Government House and Governor’s Office in a way that compromises the safety and well-being of residents and workers.

“The helicopter flies so low that it runs the risk of crashing into high-rise buildings and masts within the premises.

“The noise pollution this causes is enough irritation. This brazen show of naked force and abuse of power is as ungodly as it is undemocratic.

“If the security forces belong to all Nigerians and not to President Muhammadu Buhari and APC, it should not be biased in this blatant manner

“It is unprofessional of the security forces to allow themselves be this debased, running APC errands when they are funded with resources that belong to all of us.

“Once again, I say I will not be intimidated. I will stand on my feet until every injustice is upturned and the freedom and liberties of our people are restored.

“The thief runneth when no one pursueth. They are afraid of their shadows.”

Fayose: My Security Aides Have Been Withdrawn, My Life Is In Danger
Ayodele Fayose And His Legacy Of Violence…How NBC Terminated His Satanic Broadcasts To Prevent Bloodshed